NEW YORK, Oct. 3 (Yonhap) -- The agreement between South Korea and Japan on resolving the issue of Tokyo's wartime sexual slavery brought an end to the matter bilaterally, but that does not mean all international discussions on the issue should end, Seoul's U.N. ambassador said Monday.

In December, Seoul and Tokyo reached the landmark deal that centers on Japan's admission of responsibility for the wartime crime and plans to pay reparations to the victims. South Korea promised to end the dispute once and for all if Japan fulfills its responsibilities.

The agreement paved the way for resolving one of the biggest thorns in relations between the neighboring countries, but critics slammed the government of South Korea for agreeing to the deal without taking the victims' positions into consideration.

"Our understanding is that this agreement was reached out of a determination to resolve this issue as a diplomatic matter between South Korea and Japan, and normalize diplomatic relations," Amb. Oh Joon, chief of South Korea's mission to the U.N., said during a parliamentary audit of his mission.

"This means an end to the comfort women issue as an outstanding diplomatic matter between South Korea and Japan," he said. "Just because there was the December deal does not mean it directly affects discussions going on at the U.N. and other international arenas on the issue."

Historians estimate that up to 200,000 women, mainly from Korea, which was a Japanese colony from 1910 to 1945, were forced to work in front-line brothels for Japanese soldiers during World War II. The issue plagued Japan's relations with South Korea as Tokyo has attempted to water down the atrocity.

On the United Nations' decision to provide more than $4 million in emergency flood aid to North Korea, Oh said the U.N. deals with the North's nuclear program separately with humanitarian issues. 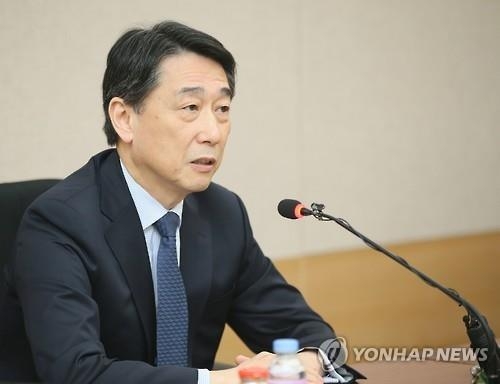