SEOUL, Oct. 4 (Yonhap) -- The election for presidency at the nation's top Olympic organization is set for this week, with two high-profile candidates expected to duel for the position.

Five candidates will be in the running in Wednesday's election for the Korean Olympic Committee (KOC) presidency. Lee Elisa, the last to jump into the race, just may be the best-known nominee, as a former world table tennis champion and a lawmaker.

The winner will serve the KOC until February 2021, and the term will cover the next two Olympic Games: the 2018 Winter Olympics in PyeongChang, the first Winter Games in South Korea, and the 2020 Tokyo Summer Games.

Lee Elisa won the table tennis world title in the team event in 1973, and was the national team coach before carving out a career in sports administration and politics. She was the head of the National Training Center from 2005 to 2008 and became a representative of the ruling Saenuri Party in 2012.

The 62-year-old entered the KOC presidential election in 2013, but she suffered a narrow defeat to Kim Jung-haeng in a 28-25 vote.

If she wins, Lee will become the first woman to head the country's top sports governing body.

"I've been involved in sports for more than 50 years," she said during the candidates' debate on Saturday. "Having been an athlete, a coach, a college professor and a legislator, I believe I am the right person to lay the foundation for the new era of sports in the nation." 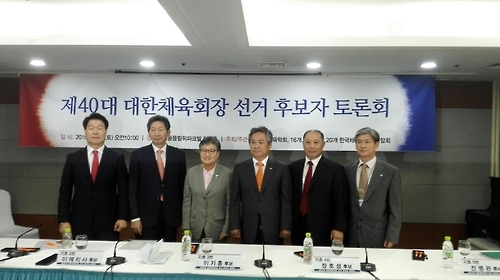 Lee, however, is regarded as a controversial candidate, with the KSF reeling from a major corruption scandal that surfaced during his watch. Key executives have been convicted and received jail terms, as the KSF is now under the management of the KOC.

There will be 1,405 voters, with representatives from the KOC and its member federations, and the National Election Commission will oversee the voting process.

The candidate with the most votes will win. In case of a tie, the oldest candidate will be declared the winner.

Under domestic law, the KOC, which oversees the country's sports in general with a focus on elite sports, and the Korea Council of Sport for All (KOCOSA), which aims to promote daily sports and a healthy lifestyle for all, had to merge by March 27 for the purpose of having an advanced management system and environment in sports.

Since the merger in March, the KOC has been headed by Kang Young-joong and Kim Jung-haeng, but the two incumbents previously announced they will not be running for re-election.

Election for top Olympic body job set for this week

Election for top Olympic body job set for this week