The law which took effect last month will be applicable to such North Koreans, making it possible for Seoul to conduct investigations into such people, said the official at Seoul's unification ministry.

Article 3 of the law only stipulated that North Koreans are defined as those who live in areas above the military demarcation line.

The Center for North Korean Human Rights Records that started operations on Sept. 28 will investigate and collect data on North Korea's human rights abuses in accordance with the law. 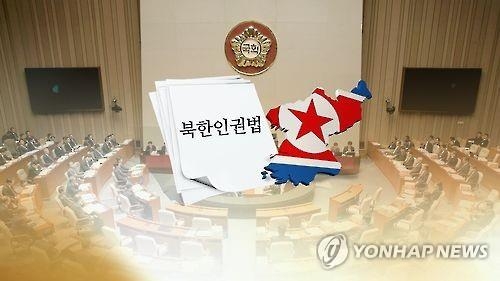 But the Ministry of Unification still remains cautious about whether it could support civic groups' moves to help North Korean defectors staying in third countries, citing the scope of the law.

Opposition lawmakers and critics are opposed to the idea of applying the law to such defectors on concerns that the move can spark a diplomatic row and it could effectively spur defections orchestrated by the government.

"We are taking a prudent stance over the issue by taking into account diplomatic relations with relevant countries," a government official said.

President Park Geun-hye on Saturday called for ordinary North Koreans to defect to the South, saying that Seoul will keep the door open for them to find new hopes and lives here.