SEOUL, Oct. 4 (Yonhap) -- The labor force participation rate for South Koreans in their 20s reached a 10-year high in the second quarter, government data showed Tuesday, due mainly to a surge in the number of jobless 20-somethings.

According to the data by Statistics Korea, 65.7 percent of people aged 20 to 29 were inside the labor force during the April-June period. It was up 1.3 percentage points from a year earlier and the highest since 65.8 percent in the fourth quarter of 2005.

In particular, the labor force participation rate for the age group jumped this year with the figure rising to 64.4 percent in the first quarter of this year from 63.3 percent in the previous quarter.

The labor force participation rate refers to the percentage of those who are in the labor force by either being employed or actively looking for jobs.

Analysts attributed the recent rise in the labor force participation rate to a rise in the number of unemployed 20-somethings. 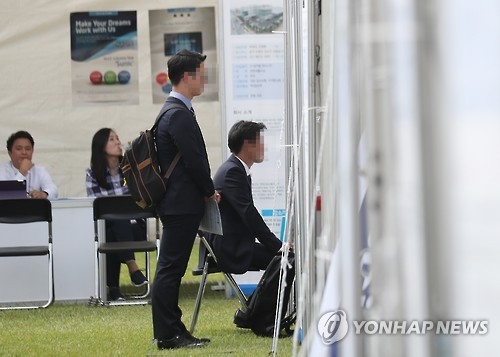 The productive population in their 20s stood at 6.42 million in the second quarter, up 0.8 percent from a year earlier, and 4.22 million 20-somethings were inside the labor force, up 2.9 percent.

The trend started in the first quarter of the year. The number of economically active people in their 20s rose a mere 2.4 percent on-year to 3.66 million in the January-March period, while the number of jobless 20-somethings soared 11.9 percent to 462,000.

Prof. Kim Kang-seok of Hanyang University in Seoul said the rising jobless rate for those in their 20s partly reflects the lack of job security and low job quality for them. "There are many jobless 20-somethings who have failed to find decent jobs after quitting part-time jobs or completing internships."

South Korea has been gripped by high youth unemployment rate amid a prolonged economic slump with the jobless rate for people aged 15-29 reaching 9.3 percent in August.
(END)