SEOUL, Oct. 4 (Yonhap) -- Lawmakers of South Korea's ruling Saenuri Party on Tuesday proposed a law to provide U.N. Secretary-General Ban Ki-moon with special privileges after his retirement from his post later this year.

"While presidents get special treatment after their retirement, we do not currently have a law that stipulates the support of those who headed major international organizations," Rep. Lee Jong-bae of Saenuri said.

Lee added similar support must be granted to Ban considering his contribution to international peace.

The proposed law includes providing Ban with a secretary and bodyguards, as well as an office.

Ban has been cited as one of the potential candidates for the country's presidential race slated for next year, although he has never expressed a clear stance on the speculation.

Political pundits said Ban may emerge as a strong candidate for Saenuri, especially amid the lack of popular figures within the party and conservative bloc as a whole.

In a poll released by local newspaper Chosun Ilbo and pollster Media Research last week, Ban stood as the No. 1 preferred candidate at 27.4 percent, followed by Moon Jae-in, former leader of the main opposition Minjoo Party of Korea, with 16.5 percent and Rep. Ahn Cheol-soo, former co-chair of the minor opposition People's Party, with 8.2 percent, respectively. 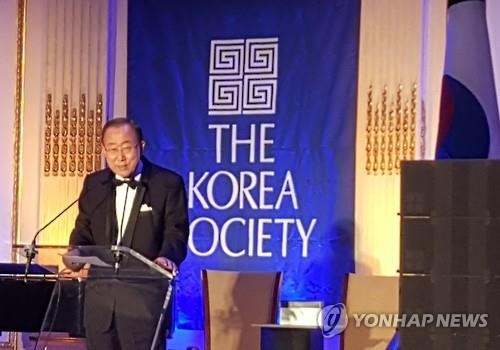