ULJU, South Korea, Oct. 4 (Yonhap) -- The organizing committee of the Ulju Mountain Film Festival (UMFF), the first of its kind in the country, is considering the establishment of an award on the world's mountain culture as part of its efforts to promote the festival and the public's awareness of mountain culture, the festival's chief organizer said Tuesday.

The festival, which opened in the southeastern county of Ulju on Friday for a five-day run with 78 movies from 21 countries being screened, features five sections comprising international competition, alpinism, climbing, adventures and exploration as well as nature and people.

Ulju County chief Shin Jang-yeol, who serves as head of the UMFF organizing committee, said in an interview with Yonhap News Agency, "It is necessary for us to set up the World Mountain Culture Award to publicize this festival and raise people's understanding of mountain-related culture." 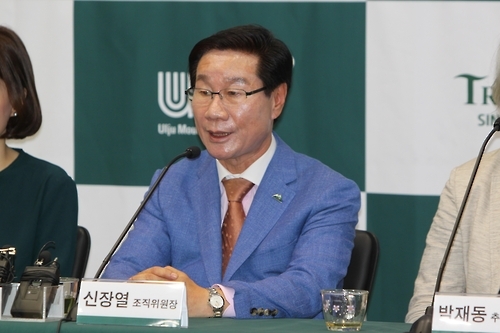 The award, if established, would be the first in the country, and the existence of a similar award in other countries is not known.

Asked about the importance of the festival, Shin said the municipality of Ulju, which is home to the Yeongnam Alps, a group of tall mountains in the Yeongnam region of southeastern South Korea, blazed the trail in the making of an international mountain festival in the country. "The festival is expected to vitalize mountain culture in the country and showcase its mountain resources to the world," Shin said.

He also stressed the importance that the organizing committee should place great importance on making the festival easily enjoyable for all who visit as it is a new genre, saying the festival's slogan is "a festival to be made by everyone."

Shin also expected that the festival will be firmly established in the future as a growing number of people has shown an interest in a mountain film festival and expressed their willingness to take part in it. "By continuing to host this festival, we will enrich the festival's content," he said.

He said the world is entering an era in which people are happy with culture and prosper from it, adding the municipality has drawn up the plan of holding the event as a long-term cultural asset.