According to the data by the Korea Deposit Insurance Corp. (KDIC), deposits of more than 50 million won (US$45,300) per account at local savings banks totaled 5.08 trillion won as of end-June, up 87.3 percent from two years ago and 14.5 percent from the previous quarter.

The portion of large-sum deposits to the total also surged to 12.5 percent in the second quarter of this year from 8.9 percent during the same period two years earlier. The number of depositors with upwards of 50 million won at savings banks also rose to 41,000 as of the end of June, compared with 21,000 two years ago.

The KDIC provides protection of up to 50 million won in principal and interest per depositor should a financial institution go bankrupt.

Market watchers say customers are rushing to put their money in savings banks as they offer higher interest than commercial banks, despite the high risk involved.

According to a trade association, the interest on one-year time deposits at savings banks averages 2.04 percent, much higher than the mid 1-percent range offered by commercial banks. 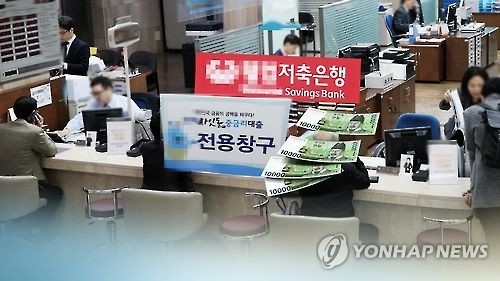 In June, the Bank of Korea, South Korea's central bank, lowered its benchmark interest rate by a quarter percentage point to 1.25 percent in a bid to help spur the weak economy.

Another factor is the fact that local savings banks have regained some of the customers' confidence they lost after a series of business suspensions five years ago by ramping up efforts to boost financial health, according to the watchers.

"Deposits exceeding 50 million won appear to be rising due to heightened customer confidence in savings banks and a lack of promising investment vehicles," an industry source said.

According to the Financial Supervisory Service (FSS), the combined net income of 79 savings banks in the country came to 483.7 billion won in the first half of this year, up a whopping 74.1 percent from the same period a year earlier.

Their average capital adequacy ratio, a key barometer of financial soundness that measures the proportion of a bank's capital to its risk-weighted credit, hovers above 14 percent as of end-June. The FSS advises savings banks to maintain a ratio of 7 percent or higher.
(END)