The three-day event, the 21st of its kind, brought together more than 800 members of the World Federation of Overseas Korean Traders Association, or World-OKTA, doing business in 140 cities across the globe at the High One resort in Jeongseon, some 20 kilometers east of PyeongChang.

This year's session, co-hosted by the World-OKTA and Yonhap News Agency, a leading news wire in South Korea, has the theme of "Establishing and taking advantage of the economic networks of Koreans."

Participants will explore ways to find new export and other business opportunities through various events including one-on-one meetings with potential trade partners to be organized by the Korea Institute for Advancement of Technology (KIAT).

They also plan to join efforts for South Korea's preparation for the hosting of the 2018 games as the venue of the conference suggests.

"It will serve as a chance for the members of the World-OKTA with 141 branches in 71 countries to step up joint efforts to publicize the 2018 PyeongChang Winter Olympics, with one year and four months left until its opening, and enhance the stature of their home country," Park Ki-chool, the chairman of the federation, said in an interview with Yonhap. 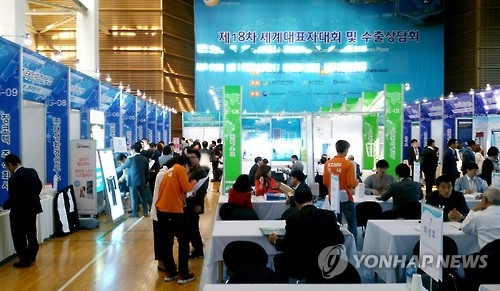 It's the first time for the World-OKTA to hold a formal event in Gangwon Province since a trade fair in PyeongChang four years ago.

Established in 1981, the World-OKTA has served as a major trading association for Korean businesspeople in foreign countries. It has more than 6,600 members.
(END)