The 11th Migrants' Arirang Multicultural Festival (MAMF) kicked off in the industrial city on Friday for a three-day run with the aim of boosting understanding between South Koreans and migrants and sharing cultural values.

Despite bad weather that resulted in changed venues, some 220,000 people enjoyed the festival, the organizing committee said, adding the fest ended without major setbacks on the back of its thorough preparations.

"It is a bit regrettable that rain disrupted some events, but we are very proud of having been able to display better performances this year than in the past," said chief organizer Lee Chul-seung. "We will try to provide an opportunity for South Korean society to better understand people from different cultures."

The festival began with performances of art troupes from four nations, including this year's guest of honor Cambodia, to mark its opening at the Seongsan Art Hall. 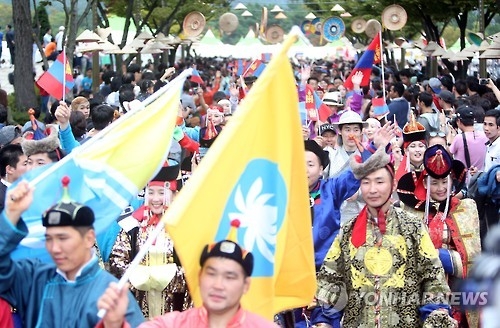 Fourteen finalists competed in the song festival on the second day, with a 32-year-old Mongolian, who came to South Korea in 2007, winning the grand prize.

Clad in their respective traditional costumes, migrants from 12 nations -- including Nepal, Mongolia, China, Vietnam, Uzbekistan and Thailand -- participated Monday in a parade on the city's central street, the centerpiece of the festival.