During her speech on the country's Armed Forces Day, Park said South Korea will help defectors "find hope and new lives" here, lending a hand to North Koreans escaping from the communists' regime.

While the ruling Saenuri Party claims it is now time for South Korea to consider the human rights of North Koreans, the opposition parties said the speech was irresponsible as it could further provoke the North.

Rep. Woo Sang-ho, the floor leader of the main opposition Minjoo Party of Korea said the remark will have an adverse impact on the inter-Korean relationships, adding the gesture can be seen as aiming for the collapse of North Korea.

"If the North Korean regime collapses, there will be refugees like the Middle East. If there are 100,000 refugees from the North, there will be 4,000 homeless for every one of the 25 districts in Seoul," Woo said, adding Park's "irresponsible" stance may bring confusion to cross-border ties.

Rep. Park Jie-won from the minor People's Party echoed the view, adding although South Korea must prepare countermeasures for every possible scenario, it should not be the first one to make a provocation.

"In the current situation, our only option is to have a conversation. We should not let go of negotiations if we are to seek a peace-based unification. We urge the president to change her stance," the minor floor leader said.

Saenuri, however, said the opposition parties' interpretation is overblown, adding the remark is only aimed at sharing sympathy with North Korean residents.

"According to the South Korean Constitution, North Korean residents are also our citizens. If they are faced with illegitimate political and economic troubles, the government must protect them," Rep. Chung Jin-suk, the party whip said.

"The president only said South Korea will actively embrace asylum seekers from the North in a humanitarian manner. It is not that we are going to forcibly bring the residents here,"

Chung also said the opposition lawmakers must refrain from sparking controversy that makes it hard for the country to focus on key outstanding issues at hand. 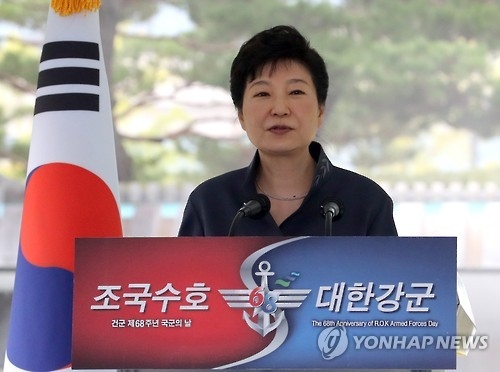 Parties at odds over Park's remark on N. Korean refugees

Parties at odds over Park's remark on N. Korean refugees