CHANGWON, Oct. 11 (Yonhap) -- Roars and craze shook up the stadium, as 70 young hearts from all around the world stood under the limelight. In the cold rain, the world K-pop cover finalists in song and dance beamed with sweat and passion, surrounded by ear-popping speakers and blinding special effects. Some 20,000 spectators swarmed the world's largest K-pop competition event, armed with raincoats and glow sticks. 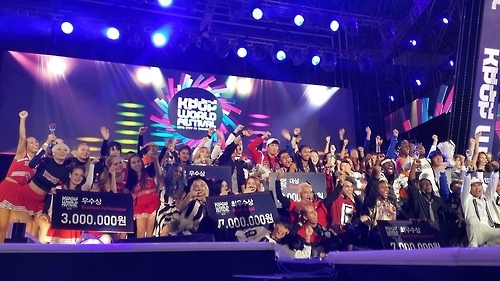 In the 200-minute final competition on Sept. 30, a total of 15 national teams vied for the crown in the sixth round of the annual K-Pop World Festival in Changwon, 398 kilometers southeast of Seoul. This year's competition was ever so fierce, resembling the Weekly No. 1 vote on local television music shows for K-pop musicians.

The best performance awards, excellence awards and audience's choice awards are given in two categories, vocal performance and stage dance performance, but the highest accolade, the grand prix, is given to only one team. On a scale of 100, the judge evaluation took up 70 percent, with 500 randomly chosen audience members vote at 20 percent and mobile vote at 10 percent. Those with the highest sum of scores top the competition.

Team U.S. of the vocal section won the top award after a close rivalry with team Nigeria of the dance section, the winner of last year's final.

"It feels crazy, I have a lot of emotions right now," said Britaney Chanel, a 26-year-old grand prix winner from Los Angeles. The young Grammy's accountant staged an explosive solo performance of R&B pop "U & I" by K-pop diva Ailee. The K-pop judges gave high credit to her balanced achievement in all factors, including vocal skills, delivery, stage presence, choreography and technical assets.

Inclement weather smudged her makeup, but Chanel stood triumphant at the awarding ceremony for an encore performance. The K-pop event brought her a step closer to her lifelong dream of becoming a world-class songwriter.

"To me, K-pop is love and language. I love it," she told Yonhap at the end of the competition.

In addition, she gave a special thanks to her family and her boss who allowed her to take two weeks off straight for the event. "He said, 'It's an awfully long time, but we'll let you go,'" Chanel recalled, visibly elated. 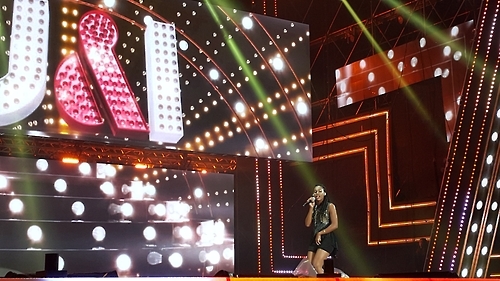 The American K-pop lover said her following of the K-pop began in her teens with Wonder Girls. In 2008, she went to a concert of the Jonas Brothers and saw the K-pop girl group perform as the opening act. After the concert, she looked up existing articles about Wonder Girls and began reading more articles about other groups from the group's management JYP Entertainment, followed by those of other K-pop agencies, S.M. Entertainment and YG Entertainment.

Along with the diversification of K-pop news and K-pop-related information outlets, Chanel has become a passionate subscriber of K-pop articles and shows on Korean media's English channels and social media.

At present, Ailee is among her favorite K-pop artists. 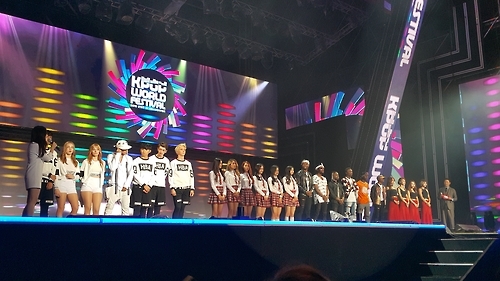 The best performance award went to team Nigeria, and the best vocalist award was presented to team Italy.

"K-pop is passion," one of the team Nigeria members exclaimed at the end of the awarding ceremony, adding to the event's festive mood.

Team Nigeria staged the hit dance-pop song "Fire" by the K-pop boy group Bangtan Boys (BTS), one of the most active South Korean boy bands in the international music realm. BTS is a performance-intensive team who favor heavy hip-hop drops and a rebellious style.

The team's performance exceeded BTS in intensity -- the stage floor partly broke after their performance -- and delivery of the choreography. The group's dance accuracy, however, was its only flaw.

"Your performance was overwhelming, full of masculinity and energy. We could hear the female audience screaming with amazement. But (the accuracy) of the group dance seems like your only weakness," one of the three K-pop judges said. 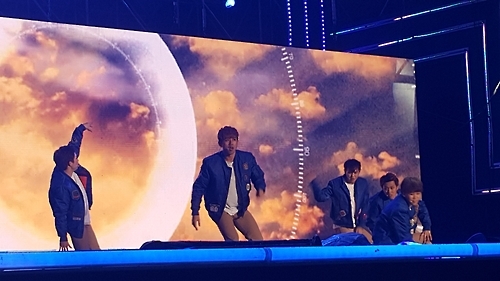 Team Italy reigned the stadium as it sang "Mr. Ambiguous" by MAMAMOO, a K-pop girl group known for its jazz-pop style of music.

The team members were dressed in black-and-white striped outfits, flaunting the harmony of the quartet's rich voices.

"The expression was outstanding -- it made me feel like watching a musical at a theater," said Seo In-young, the only female judge at the K-pop competition.

"Your performance was on par with that of MAMAMOO," she added, stirring up another round of frenzy among the crowd.

A mix of K-pop and jazz has become popular in the past few years, as seen in the case of female artists, including MAMAMOO, Lee Hi and IU. 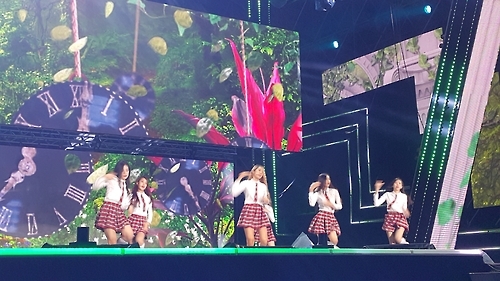 "This is exactly how I intended the artists to perform when I wrote 'Cheer Up,'" said Blackeyed Pilseung, the songwriter of the dance pop song. The revelation of the songwriter was a pleasing surprise for team Sweden, as the list of judges are kept under cover until the competing songs are finalized.

Team India tugged the heartstrings of listeners with a mellow love ballad, but lacked confidence -- a quality that the rest of the winners wore like uniforms.

A judge said, "I love your voice, but you need more confidence. (Lack of confidence) made your pitch unstable at certain points. Otherwise, your rendition was excellent." 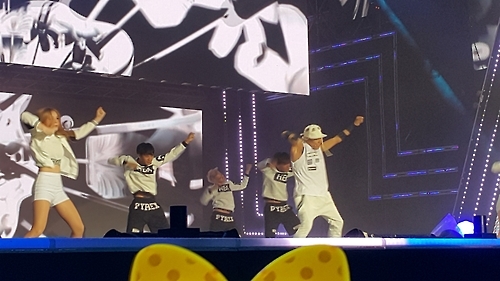 Team Russia's "Ringa Linga" staged a precise reproduction of the song by the original singer Taeyang of K-pop boy group BigBang. The performance won the second highest votes in the concert watchers' vote, which accounted for 20 percent of the total score. However, it fell short of the judges' expectations for a higher accolade.

"I think you are straining yourself too strictly to the (original) dance moves," one of the judges said.

Frzat, a Russian performer who danced Taeyang's part, wished to return to the K-pop festival next year for a better show. Once again, he would have to become the winner in next year's preliminary competition in Russia to be able stand on the same stage next fall.

Every year, the K-pop event has become more competitive, as K-pop music is gaining a larger fan base in the global music market and media.

"It was an interesting event, especially because it shows an overall view of which idol groups are hot in which parts of the world," said one of the invited guests of the event, asking for anonymity.

The K-pop competition, the largest of its kind, is hosted by the Ministry of Foreign Affairs, state-run television broadcaster KBS and the Korean Culture and Information Service to further spread "hallyu," or the global following of Korean pop culture.

The global K-pop event was live-broadcast in some 100 countries via television broadcaster KBS and its broadcasting app "KBS myK," as well as through online broadcasting platforms Naver Cast and YouTube. 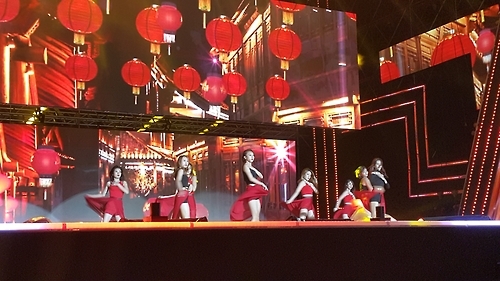