In the joint exercise that ends on Wednesday, some 200 U.S. marines and 120 of their South Korean counterparts are taking part in a bilateral training exercise that aims to strengthen the allies' military capabilities and interoperability, South Korea's Marine Corps said in a statement.

"The two countries' troops have conducted the joint exercise to be more prepared, mentally and physically, to cope with unexpected nuclear and missile threats from North Korea," the statement said. 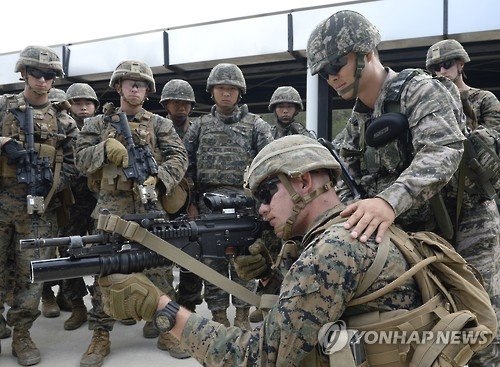 The drill, named Korea Maritime Exercise Program (KMEP), has been held since 2012, two years after North Korea sank a South Korean warship that resulted in the deaths of 46 sailors.

The allied militaries have conducted 12 to 19 drills a year around the frontline islands, including the country's northernmost Baengnyeong Island and Yeongpyeong Island, to counter possible provocations from the North since 2010.

In addition to its torpedo attack on the Cheonan corvette in early 2010, Pyongyang mounted an artillery attack on Yeonpyeong Island that killed four South Koreans, including two civilians in November of the same year.

Moreover, the North has launched a series of ballistic missiles as it moves forward with its stated goal of developing a nuclear-tipped intercontinental missile that can reach the U.S. mainland.