Leeco Sports Agency said the South Korean infielder will arrive home on Friday. The Pirates missed out on the postseason for the first time since 2012 with a record of 78-83.

This will be Kang's first homecoming since January 2015, when he left to sign a four-year, US$11 million contract with the Pirates. He was the first Korean position player to sign with a big league club after going through the posting.

Kang finished third in the National League Rookie of the Year voting in 2015, after batting .287 with 15 home runs and 68 RBIs in 126 games. His season was cut short in mid-September when he sustained serious leg injuries on a hard take-out slide by Chris Coghlan of the Chicago Cubs.

Kang chose to stay in the United States last winter to undergo rehab, and returned to the majors in May.

Despite missing 59 games this year -- he was also sidelined with a shoulder injury in August -- Kang established career-highs with 21 home runs and 62 RBIs. He's the first Asian infielder to hit more than 20 homers in a major league season.

He was named the National League Player of the Week for the first week of September. 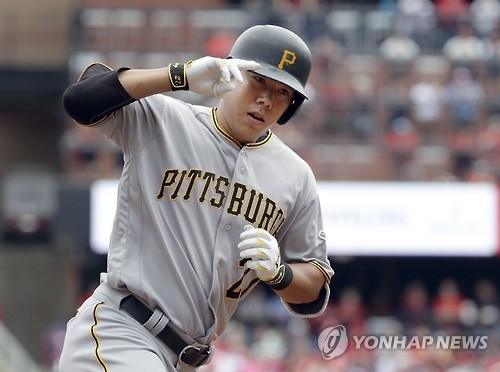