The Ministry of Public Safety and Security said the team will prepare comprehensive measures, including ways to improve the country's disaster alert system and education program for citizens, in order not to repeat similar problems that occurred during the latest quake.

On Sept. 12, the country's historic city of Gyeongju, located some 371 kilometers southeast of Seoul, was jolted by two quakes. One of them was magnitude 5.8 tremor, the strongest to hit the Korean Peninsula to date.

There has been criticism of the country's disaster alert system as the alert messages were sent to the public nine minutes after the strongest quake struck the city.

The task force, co-chaired by Vice Public Safety Minister Lee Sung-ho and professor Kim Jae-kwan from Seoul National University, will study cases of other countries, including Japan and the United States, the ministry said during a press briefing held at the government complex in central Seoul.

Also included in the plan is to establish guidelines on ways to protect cultural heritages from strong seismic activities.

The detailed instructions will be rolled out by the end of this year, the ministry said.

The ministry said a total of 23 people have reported injuries due to the quakes so far, adding the amount of damage is estimated to hover over some 11 billion won (US$10 million). 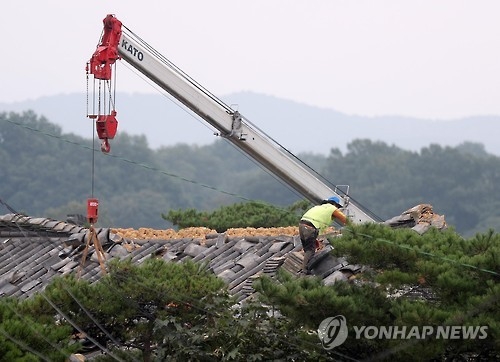