SEOUL, Oct. 4 (Yonhap) -- The chief of the Hanjin Group, the parent company of cash-strapped Hanjin Shipping Co., apologized on Tuesday for its shipping affiliate's court receivership causing cargo chaos around the globe, but stressed that the country's No. 1 shipper should be salvaged regardless of its ownership.

Early last month, Hanjin Shipping, the world's seventh-largest shipping line, was put under receivership as its creditors, led by the state-run Korea Development Bank, rejected its latest self-rescue package worth 500 billion won (US$451 million), which fell short of the 700 billion won demanded by its creditors.

Its court receivership sent ripples through the global shipping network and left more than half of its ships stranded at sea.

"I feel fully responsible for Hanjin Shipping's receivership and cargo chaos, but I want to say that we have done everything we can do to save the shipper," Cho Yang-ho, chairman of the Hanjin Group, said during a parliamentary audit earlier in the day.

The chairman said Hanjin Shipping fell victim to the global players' game of chicken which forced the local shipper to cut already extremely low freight rates to compete with them. 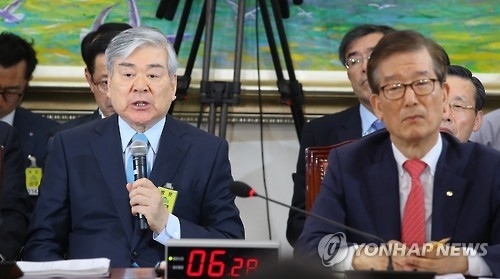 Cho stressed that the Hanjin Group has poured some 2 trillion won in cash into the shipper since its acquisition in 2014 and lowered its debt ratio to 800 percent from 1,400 percent.

He stressed that the shipper should be saved, as the country's exports hugely rely on maritime transportation.

With the loan, Hanjin Shipping has raised a total of 110 billion won in cash.

The shipper's main creditor, KDB, also extended a credit line worth 50 billion won to the embattled shipper to help the ailing company offload cargo at ports around the globe.