Prime Minister Shinzo Abe told a Diet budgetary committee on Monday that he "is not considering at all" sending letters of apology to the so-called comfort women who were forced to provide sexual services to the imperial Japanese military forces during World War II.

The remarks were in response to growing calls in South Korea and Japan for an official apology from the top leader in addition to the financial assistance Japan has provided to the women.

On Dec. 28, the two countries reached a landmark accord to end deep-rooted diplomatic feuds over the issue, in which Japan injected 1 billion yen (US$9.8 million) to a South Korean foundation devoted to supporting the victims.

"Increasing domestic acceptance of the Dec. 28 agreement is important and completely healing the victims' scars and recovering their honor and dignity are also important. For this reason, the government will continue cooperation with the Japanese side to achieve these goals as soon as possible," Cho June-hyuck, spokesman at the Ministry of Foreign Affairs, said in a regular briefing. 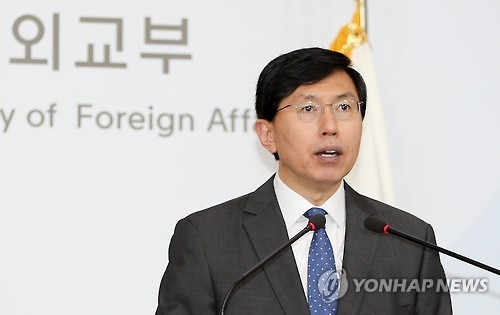 Cho said such efforts will be made within the framework of the bilateral agreement's spirit and object.

Asked to respond to the Japanese leader's remarks, however, the spokesman said he will "refrain from commenting on Prime Minister Abe's specific wording."

The spokesman said last week that the South Korean government "expects the Japanese side to take additional emotional measures to console the victims' wounds," alluding to Seoul's call for a top-level Japanese apology to the women.

As long as Japan faithfully implements the bilateral deal, South Korea will call the sex slavery issue settled between the two nations, but South Korea will continue its international discussion over women's human rights and other universal aspects of the issue, the official noted.

"If the conditions of the agreement are faithfully implemented, (South Korea) will not raise the comfort women issue at the government level," Cho said. "Efforts on other levels will continue, including participation in international discourse on wartime sexual violence and women's rights as a universal value."