CHANGNYEONG, South Korea, Oct. 4 (Yonhap) -- Twenty crested ibises were shown to the public at a restoration center for the birds in Changnyeong, a town in South Gyeongsang, on Tuesday, making them the first in the country to meet with people in 37 years.

At an event hosted by Upo Korean Crested Ibis Restoration Center to showcase the birds, they fluttered their feathers and flew inside a cage after being released, with 200 people, including South Gyeongsang Gov. Hong Joon-pyo, Changnyeong municipality chief Kim Choong-sik, residents and elementary school students in attendance.

The center plans to release the 20 crested ibises, born in captivity last year, to the wild around October next year.

The internationally protected bird, called "ttaogi" in Korean, was spotted for the last time in the Demilitarized Zone separating the two Koreas in January 1979. South Korea has been trying to reintroduce the species into the wild since 2008, when a pair of Chinese-born crested ibises -- male Yangzhou and female Longting -- were donated by China. The center now has 171 crested ibises in captive breeding. 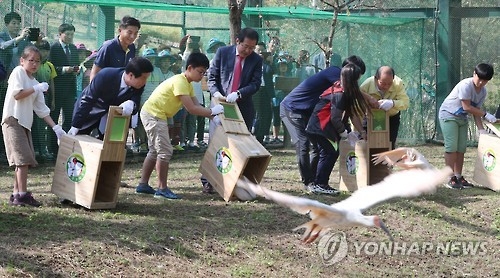 "The crested ibises shown today are the candidates that will be reintroduced to the wild for the first time," said Kim Sung-jin, a researcher at the center, adding the center will implement five-stage training -- flying, hunting, social ability, relations with people and things -- before they are released to the skies over the Upo wet land in the town.

The center will run a program in which visitors are allowed to see the birds four times a day except for Monday. 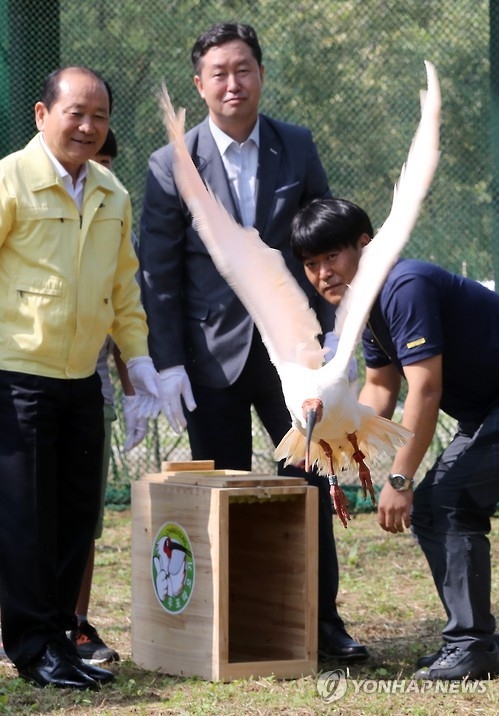 Crested ibises shown to public for 1st time in 37 years

Crested ibises shown to public for 1st time in 37 years