SEOUL, Oct. 4 (Yonhap) -- Athletes need to do their part to ensure transparency in the world of sports, international experts said at a forum held here Tuesday.

The International Sports Relations Foundation hosted the forum entitled "Promoting Clean Sport" to discuss the promotion of transparency and the spirit of fair play in sports.

Maister, a former Olympic field hockey champion from New Zealand, spoke of his "anger and frustration" about doping in sports, and said the world of sports is now "at a crossroads."

"A wider reform is required, and it's about taking individual and collective responsibilities," Maister said. "Sanctions for cheats need to be loud and clear. Teams and organizations should have 'values-based' vision or philosophy, but it will mean nothing unless there's leadership that can help move things along faster." 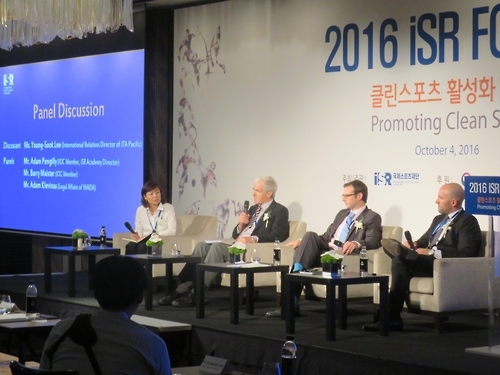 Maister noted that as long as sports are contested by human, there will always be temptation to cheat. Some countries will reward athletes so lavishly that they will stop at nothing to win, Maister added.

"Sports are clean when fair competition ensures the best team wins, and when training and skills determine the outcome," he said. "And true competition and fair results put the focus on the genuine athlete performance. It falls upon athletes themselves, their parents, coaches, trainers and medical personnel to take responsibilities."

Klevinas, a former Canadian kayaker, further highlighted the responsibilities of athletes, pointing out that they need to know their roles as detailed in the WADA's Anti-Doping Code.

"They must be knowledgeable of and comply with the anti-doping rules that apply to them," he said. "They must be available for sample collection at all times, and be responsible for what they ingest and use. They must also informi medical personnel of their obligation not to use prohibited substances and methods."

Pengilly, a two-time Olympian in skeleton for Britain, discussed changes that need to be made to international sports governance. He expressed misgivings about a small number of stakeholders monopolizing decision-making processes, and leaders serving with no limit on their term.

"In terms of transparency in decision making, the concentration of power can be quite problematic," he said. "Term limits should be brought in across sports. I've not witnessed enough speed in our evolution (in sports). There can be simple changes, such as having independent board members with expertise (within organizations)."