In September, the combined sales of five automakers here came to 693,529, down 2.1 percent from the 708,524 sold globally in the same month last year. 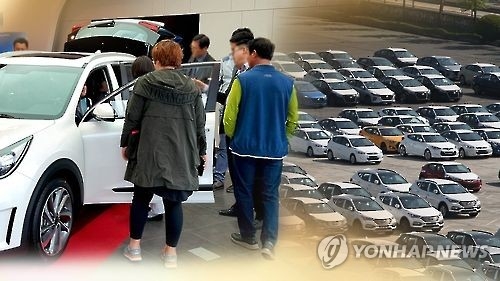 Hyundai Motor has faced more than a dozen rounds of walkouts staged by its unionized workers at its main production facilities since July that have so far caused a cut in output of more than 100,000 vehicles, company officials have said.

Kia Motors, the country's No. 2 automaker and an affiliate of Hyundai, also reported a 14.9 percent cut in its domestic sales last month, as it too has faced several rounds of labor strikes sparked by failed negotiations over wage hikes.

Despite their apparently large cuts in domestic output, both Hyundai Motor and Kia Motors continued expanding their overseas sales, albeit at a slow pace, as they both boosted their overseas production.

Renault Samsung was the only South Korea-based carmaker to report a sales increase in the local market, as its recently launched SM6 midsized sedan and the new QM6 crossover SUV helped boost its domestic sales 39.6 percent on-year to 9,222 cars in September.

"September exports came to 4,335 units as the output of the Nissan Rogue produced here had been temporarily reduced due to a model year change. Last month, a total of 3,127 Nissan Rogue vehicles were shipped overseas, but the company expects to ship about 10,000 units of the 2017 Nissan Rogue from this month, recovering its previous level of exports," the company said in a press release.