SEOUL, Oct. 6 (Yonhap) -- A silvery butterfly flutters its wings, leading an army of colorful peers to the tune of dreamy, serene music. A row of mountains appears where a deer elegantly walks, passing a placid stream in which turtles swim in line, occasionally accompanied by a dragon and dispersing flower petals floating by. When Korean traditional lanterns light up the stream, a line of high-rises, the face of a modern Seoul, makes itself visible.

These fantastical images are part of the light show currently taking place at Gyeongbok Palace, the biggest palace in Korea from the Joseon Dynasty (1392-1910). It adds spark to the historic building that otherwise would have slept in pitch-black darkness at that time of the day. 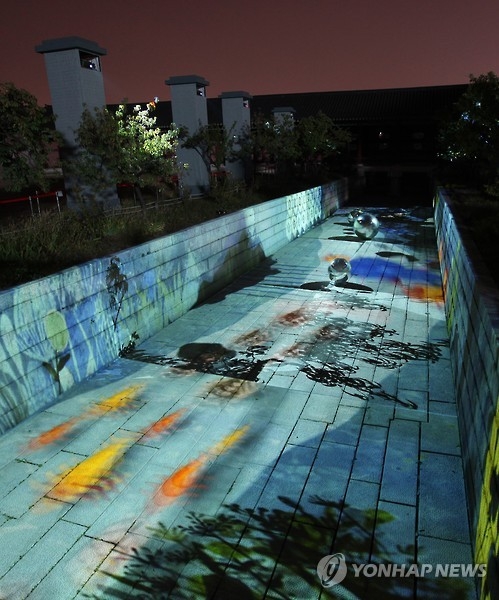 Night tour programs at historic places are nothing new.

For the last few years, the South Korean culture ministry has launched various night programs at cultural landmarks to make the best use of the facilities and diversify what the country's tourism sector can offer for an increasing number of foreign tourists.

But the project at Gyeongbok Palace is one of the most ambitious yet among similar programs, said Yoon Tae-yong, chief of the Cultural Content Industry Office at the Ministry of Culture, Sports and Tourism, during a press briefing last week.

"Promoting historic places in a traditional way can only go so far. We should add something new and modern like technology, Korea's strong point, so that visitors can have different experiences," Yoon said.

The new program that runs until Oct. 28 is different from previous ones in that it shows animation created by projection mapping, a technique that enables images to be projected on non-flat or non-white surfaces, such as stone floors and wooden walls, accompanied by music and dance performances. 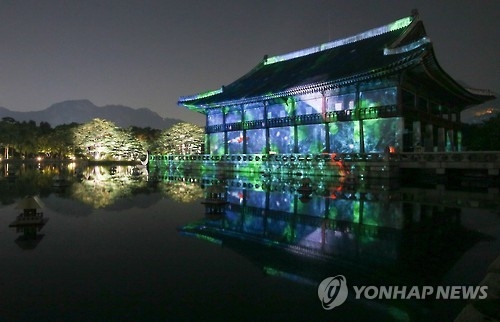 The ministry had originally chose 11 spots inside the palace as venues to show the program, but thought better of it later, he said.

"Rather than going too ambitious from the start, we decided to be more focused. We've chosen the two most popular places and plan to gradually expand the program to other parts of the country after monitoring initial responses and making some adjustments, if necessary."

The 1 billion won (US$902,000) project is part of the government's initiative to enhance and push soft power as the country's new growth engine. Cultural products have become ever more important amid sluggish exports in electronic goods, cars and steel products, which are the mainstay of the country's economy.

"By combining traditional content and technology, our cultural assets can rise as the essence of the country's powerful, attractive soft power," Yoon said, adding that the government felt the need to develop more diverse tourism options for overseas travelers as the current ones, critics say, are focused too much on shopping. 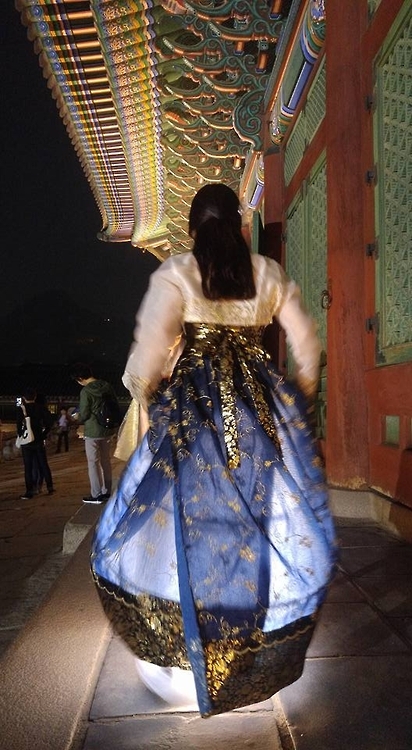 On a recent evening when the sky had yet to darken completely, a swarm of visitors was standing on Youngje Bridge, looking down at the now-dry Geumcheon stream. During the dynasty, only the king was allowed to cross the bridge. They were enjoying the colorful, vivid animation "Walking on Dreamy Path," created by projection mapping. The show ran for four minutes, featuring Korean traditional icons, elements and mystical creatures that flew down the stream, breathing new life into the remnants of the past.

"I came here twice before, both during the daytime, and I think it is much better at night because it is more beautiful and different and less crowded," said Spanish student Quillermo Regorigo from Sogang University in Seoul.

Walking deeper into the palace complex and one finds Gyeonghoeru Pavilion, the second multimedia spot that features a larger, longer and more sophisticated show. The pavilion, National Treasure No. 224, used to be the venue for royal feasts when the king entertained foreign envoys or court officials.

For the 12-minute show "Share and Benefit All," the facade of the historic building turns into a giant, seamless canvas to show a kaleidoscopic, wondrous piece about a fictional dream that King Sejong, the inventor of the Korean alphabet, had in childhood. Hundreds of spectators let out even louder exclamations of delight at the spectacular view. 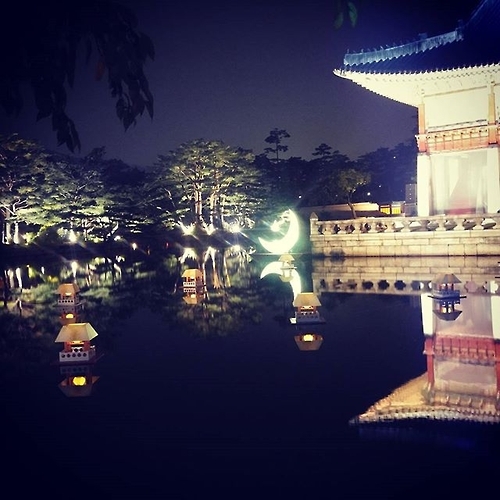 Eight minutes into the media show, a dozen dancers in traditional dress appeared in front of the two-story pavilion, elegantly performing against the backdrop of the show that is constantly changing colors. Every delicate move is reflected on the pond that surrounds the pavilion, adding a more surreal ambiance to the atmosphere. At one point, all the nights went off and a golden dragon with emerald-green eyes swirled around and then flew over the pavilion into the sky. Soon, the shadow of what appeared to be King Sejong briefly shows up, followed by a full moon and countless twinkling stars.

"Influenced by the moonlight, I walked on a dreamy path. I saw something beautiful and I had a beautiful dream. I wanted to share and let everyone benefit," a voice said while white petals rain down on the pavilion's facade. The metaphoric message is believed to be the philosophy of King Sejong's rule. 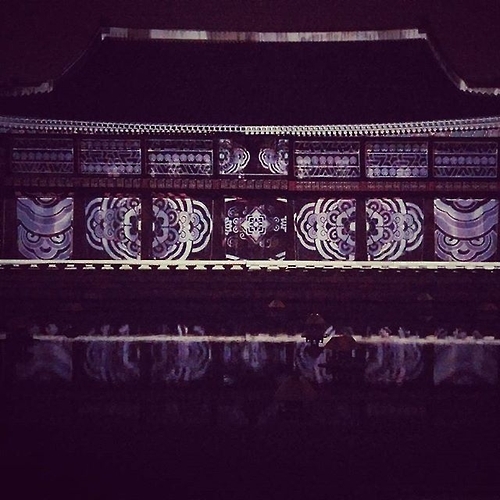 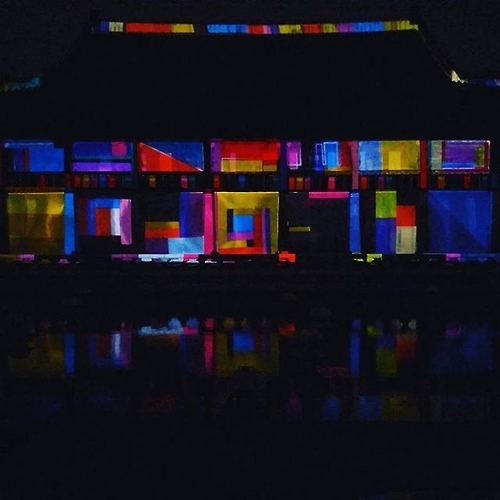 Ashely Eudaly, a traveler from the U.S., watched the show with three of her friends. She said she hadn't seen anything like this before and that it made her want to learn more about Korean history.

"It was really beautiful. I thought I would have liked to know more about the dance and what it meant, along with the people who were in it and, you know, what characters they would have been in history," she said.

"Old buildings are not normally lit at night so they look boring. But watching them in vivid light after the sun goes down is pretty cool," said Matt Hasler, a tourist from Switzerland. Pausing for a moment from taking pictures, he added, "It gives them a different character and tells us a story." 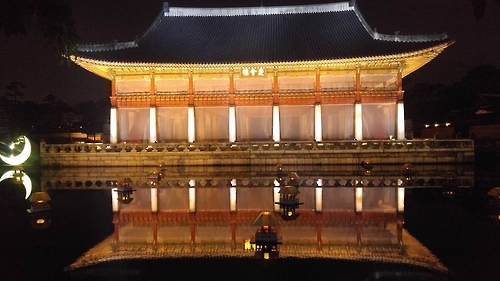