SEOUL, Oct. 4 (Yonhap) -- The Doosan Bears broke a single-season wins record in the Korea Baseball Organization (KBO) with a 6-5 victory over the Lotte Giants on Tuesday.

The Bears have earned their 92nd victory of the season at Jamsil Stadium in Seoul, surpassing the previous record held by the now-defunct Hyundai Unicorns in 2000. The Unicorns then collected 91 wins in a 133-game season.

The Bears already clinched the South Korean baseball pennant, their first in 21 years, last month and earned the bye to the Korean Series. As the third seed last year, they had to go through two postseason rounds to reach the championship stage.

The Bears achieved the milestone in an extra-inning, walk-off fashion.

The Giants first broke a 4-4 deadlock in the top of the 10th inning after Kim Jun-tae hit a double with a runner on first base. The Bears, however, escaped a bases-loaded, one-out jam to end the inning without giving extra runs.

In the bottom of the 10th, with runners on second and third with one out, Jung Jin-ho drove in two runs with a single to right field to end the game. 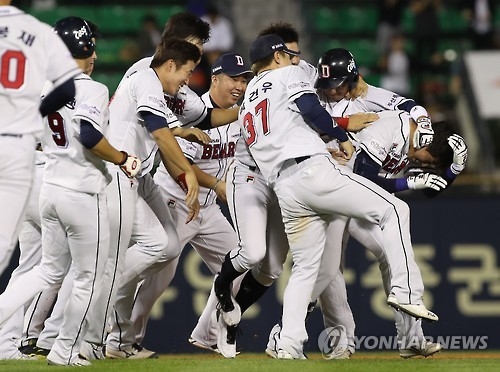