WASHINGTON, Oct. 4 (Yonhap) -- The next U.S. president should consider negotiations a primary option for resolving the North Korean nuclear standoff, but make sure not to offer key concessions, such as suspension of joint military exercises with South Korea, without consultations with Seoul, a former U.S. negotiator said Tuesday.

Robert Gallucci, who negotiated a 1994 nuclear freeze deal with Pyongyang, made the point during a discussion in Washington, stressing that Seoul and Washington must be in lockstep with each other with regard to the goal and other aspects of negotiations with Pyongyang.

"This is advice to the next American administration, not that they're asking for it, but be very, very careful not to put on the table elements, carrots for the North that go to in their essence the U.S.-ROK alliance," Galluci said during a discussion organized by the U.S.-Korea Institute in Washington.

Gallucci cited as an example the North's long-running demand for an end to joint military exercises between South Korea and the U.S. Pyongyang has condemned such drills as a rehearsal for invasion despite repeated assurances that they're purely defensive.

"Whatever we decide to do, we the U.S. ought to be of this kind in consultation with Seoul. If we do that then we preserve the alliance at the same time as we try to be creative about what might be on the table in negotiations with the North," he said.

Gallucci also said that Seoul and Washington should not enter into negotiations unless they agree on the objective.

"The first thing I would worry about, as an American concerned about the alliance, is that we not enter serious, hopefully durable negotiations unless both sides agree that the objective of successful negotiations would be a North Korea that could re-enter the Nuclear Nonproliferation Treaty," he said. 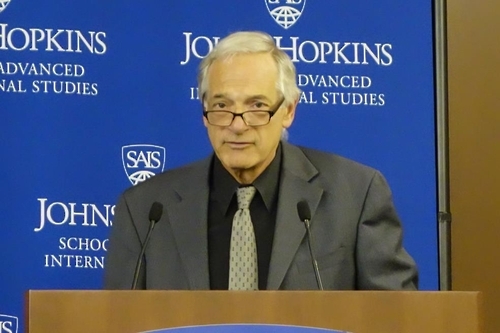 Gallucci also stressed that negotiations should be the No. 1 means for resolving the nuclear standoff.

He said that Pyongyang would be willing to negotiate away its nuclear ambitions if there is an agreement that guarantees the regime's "survival with as much certainty as they think nuclear weapons will give them as deterrent to U.S. efforts at regime change."

"I understand that they have wanted to convey the idea that they will never give up their nuclear weapons program. My view is that just raises the price. It doesn't mean they're not for sale," Gallucci said. Negotiations with the North will be hard, but there is no good alternative to that, he said.

Imposing stronger sanctions on Pyongyang and taking other tough measures, including even a preemptive strike on the North, would only make the situation worse, the former negotiator said.

"We could continue just as we are now. We could continue with what might be called some version of containment, where we have a sanctions regime, we attempt to limit the North Korean options politically and economically. But, as has been noted, as we do contain the North, we also watch the situation get worse," Gallucci said.

"As someone has said, the North Korean case is not like fine wine. It doesn't get better with age. With each passing month and year, we look a nuclear weapons capability that grows qualitatively and quantitatively. We see ballistic missile capability also growing," he said.