GM Korea shipped about 900 Malibu units to the region in August and 1,493 vehicles in September, while it expects to export nearly 1,000 Malibus this month.

Last month, GM Korea shipped Malibu sedans to such major Middle Eastern countries as Saudi Arabia, Kuwait and the United Arab Emirates, where the new model will make its debut during October.

The sources said all of the Malibus to be exported to the Mideast will be manufactured in South Korea.

The all-new Malibu is the ninth generation that GM Korea claims has outstanding designs and best-in-class size and power along with state-of-the-art safety and convenience features.

GM Korea says that the Malibu can appeal to customers with its price starting at around 23 million won (US$20,700). The automaker plans to unveil the hybrid version of the Malibu this year. 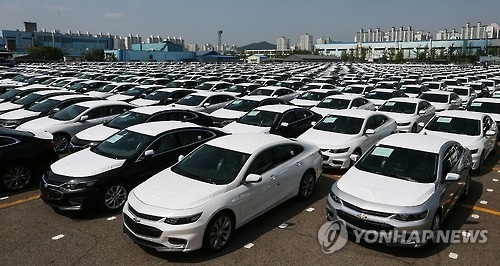 GM Korea expects the full-fledged start of Malibu sedans produced in South Korea to the Middle East to have a positive impact on its overall overseas shipments.

With the start of Malibu exports to the Mideast, GM Korea's overseas shipments of midsize and large cars spiked 206 percent in August from a year earlier and 212 percent in September. The automaker didn't disclose how many cars had been exported each month.

"The Malibu is expected to gain popularity among Middle Eastern drivers just like in the United States, China and South Korea," a GM Korea official said. "GM Korea will help make the Malibu a global midsize sedan."

Some watchers, however, warned an increase in Malibu exports could lead to weaker demand for the midsize sedan in South Korea. Last month, GM Korea sold some 5,000 Malibus in the country, with up to 8,000 units yet to be shipped.

"As the labor and management struck a collective bargaining agreement last month, GM Korea will ramp up efforts to boost production to shake off concerns over a fall in output to meet domestic demand," the company said.

In early September, both sides reached a wage agreement, which calls for GM Korea workers to have their monthly wage increased by 80,000 won and receive up to 11 million won in various incentives.
(END)