Four people have been reported dead as of 6 p.m., according to the Ministry of Public Safety and Security, with another three people missing in the southern cities of Busan, Ulsan, as well as on the country's resort island of Jeju.

Power went out at around 227,000 houses in the typhoon-hit region, but 82 percent of them have been restored so far, according to the Korea Electric Power Corporation.

A total of 120 flights across the country were canceled, along with the suspension of major domestic and international sea routes, according to the ministry. The country's high-speed KTX trains were also affected by strong winds and downpours.

Daewoo Shipbuilding & Marine Engineering Co., a major shipyard, also suspended operations on the southern island of Geoje due to a blackout caused by the typhoon, but was normalized at around 5:15 p.m.

The Busan International Film Festival, which is set to kick off on Thursday, is expected to face problems as the typhoon destroyed some of its venue sites, its organizers said.

The government said it will start gathering reports on damage on public and private facilities starting Thursday and establish a detailed restoration plan by the end of this month. 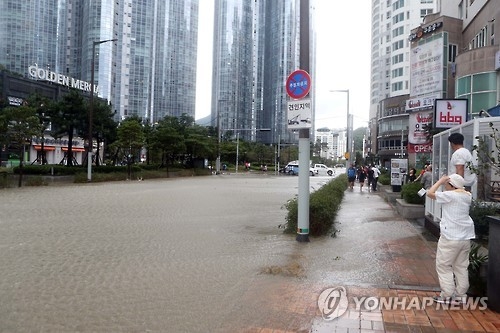