"It's an indispensable financial reform task," Yim Jong-yong, chairman of the Financial Services Commission (FSC) said at a government-civilian meeting on improving the nation's financial system.

The government will push for the spread of a "performance-oriented culture" on the basis of constant principles, he added.

Yim's comments came as bank workers here strongly oppose the government-led drive. They say it will only undermine the soundness and quality of banking services.

The Korean Financial Industry Union, a major umbrella union of bank workers nationwide, staged a general strike last month and it plans to launch another collective action in November.

The FSC chief urged the union to avoid a "repeat of wrongdoing" at a time when many South Koreans face difficulties from corporate restructuring and high youth unemployment rates. 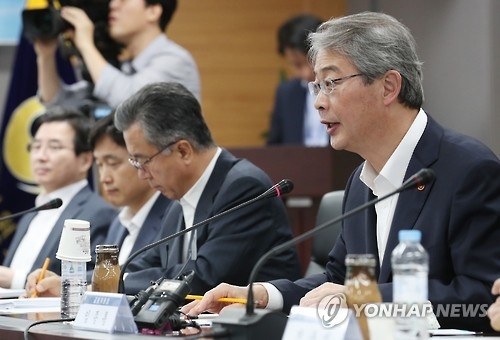 He also cited a number of uncertainties facing Asia's fourth-largest economy such as the possibility of U.S. interest rate hikes, China's low economic growth and the fallouts from Brexit.

Yim urged unionized bank workers to pool their ideas in talks with management on ways to introduce a "reasonable performance-based pay" system.

While many financial services firms in South Korea already offer year-end bonuses to workers in accordance with their productivity, monthly salaries are still tied to seniority and length of service in a traditional hierarchy.