During a ceremony marking Korean Day, Park also asked them to play a role as "civilian diplomats" and promote Seoul's policy towards the communist state, contending that international support is critical in achieving her policy goals to ingrain peace on the Korean Peninsula.

"When North Korea's nuclear threats dissipate and the door for peaceful unification opens, new opportunities for happiness and prosperity will emerge not only for us, but also for the 7.2 million overseas Koreans and other countries around the world," the president said. 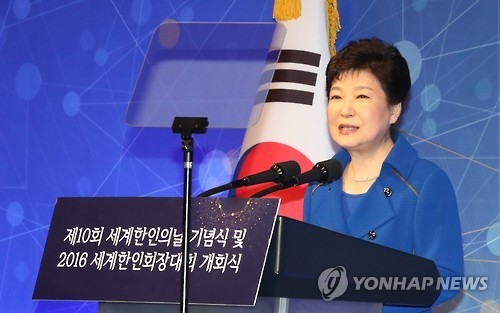 "Overseas Koreans, will be able to travel around in every corner of the peninsula and obtain news about the members of long-lost families," she added.

South Korea has observed Korean Day since 2007 to help 7.2 million overseas Koreans maintain their identity as ethnic Koreans and enhance national pride. The ceremony to mark the day was held together with the World Korean Community Leaders Convention, a gathering of some 400 chiefs representing South Korean communities in more than 80 countries.

The chief executive used her speech to criticize Pyongyang's "fanatic obsession" with nuclear arms, saying the recalcitrant regime has thrown cold water on Seoul's efforts to promote peace on the Korean Peninsula through two nuclear tests this year alone -- in January and last month.

"The more North Korea becomes obsessed with its nuclear and missile programs, the worse its international isolation and economic hardships will get," she said. "After all, (the programs) will lead to its self-destruction."

"You, overseas Koreans, have written success stories based on your unique sense of independence and diligence," she said. "You have not only contributed to the development of your host nations, but also helped enhance relations between your home country and host country."

During the convention, Park conferred national decorations and citations to five individuals and one group that contributed to the advancement of South Korean communities in foreign countries, including an association of Germany-based South Korean nurses. The awardees were among 98 overseas Koreans who were honored with national medals and other prizes.

The convention, which has been held annually since 2000, began its four-day run on Tuesday. Hosted by the state-run Overseas Koreans Foundation, the gathering features various debates and policy forums on a set of current issues concerning overseas Koreans, and also is a venue for cultural performances. 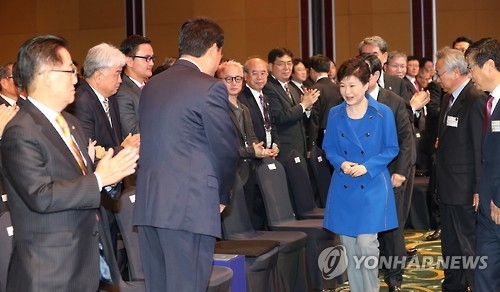