SEOUL, Oct. 5 (Yonhap) -- The South Korean government and the ruling Saenuri Party have agreed to consider purchasing surplus rice produced in the country in bulk to ensure price stability amid concerns of falling prices caused by a better-than-expected harvest.

"We urged the government to purchase the surplus production in bulk within this year to separate them from the market," said Rep. Kim Gwang-lim, the policy official of Saenuri, after the meeting, adding the government also said it will make efforts to reflect such a move.

The two sides also agreed to find ways to promote exports of locally produced rice in order to maintain the price while improving distribution networks.

Saenuri said it is necessary for the government to buy up the surplus in bulk, since small separate purchases will benefit retailers rather than smaller farms.

They also agreed to reorganize the country's agriculture-only zones, inducing more farmers to utilize their land for other purposes.

Rice prices in the country have been falling throughout this year on the back of favorable weather coupled with rising stockpiles.

A record 4.32 million tons of rice was harvested last year, and it is expected to be similarly robust this year. The strong numbers come as good weather conditions and an absence of typhoons hitting the country helped grain production, the Ministry of Agriculture, Food and Rural Affairs said last month. 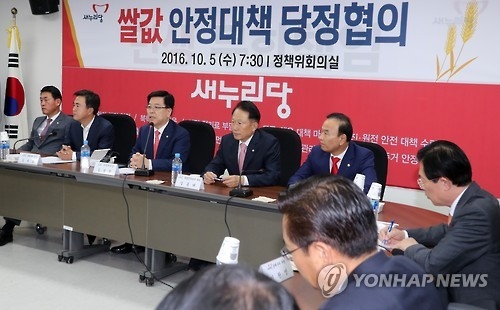