SEOUL, Oct. 5 (Yonhap) -- Owners of South Korea's major business groups have been reluctant to give their assets to their children over the past few years due to the large burden of gift taxes, a market tracker said Wednesday.

According to CEO Score, the "asset succession rate" for the country's top 50 family-controlled conglomerates, known here as chaebol, stood at 32.7 percent this year, up a mere 4.1 percentage points from 2011.

The figure refers to the portion of assets held by offspring compared to the owner families' total assets. CEO Score said the major reason for the slow pace stems from the country's high gift tax rate for chaebol.

The increase rate for the leading conglomerates came to 7.1 percentage points over the cited period, nearly double the overall gain.

The comparable figure for the bottom 10 conglomerates reached 27.8 percent this year, far lower than the overall average, due to the young age of the controlling shareholders or the short duration of their business. 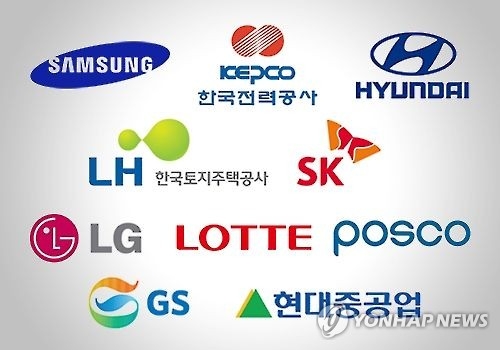 Samsung Group, South Korea's top conglomerate by assets that has world's No. 1 smartphone maker Samsung Electronics Co. under its wing, saw its asset succession rate surge to 43.4 percent this year from 23.9 percent in 2011.

Taeyoung had the highest rate of 99.6 percent, followed by Korea Investment Holdings with 94.9 percent, Hansol with 89.5 percent, KCC with 88.1 percent and Lotte with 83 percent.

The value of shares owned by the heads of the top 50 business groups soared 26.9 percent over the cited period to 74.3 trillion won (US$66.9 billion), with the amount for their children spiking 38.1 percent to 35.6 trillion won, according CEO Score.
(END)