SEJONG, Oct. 5 (Yonhap) -- South Korea's finance ministry on Wednesday remained cautious about whether Asia's fourth-largest economy has gotten on a clear recovery track, as economic indicators have been fluctuating in recent months amid rising uncertainties at home and abroad.

In its reports submitted to the National Assembly for an annual parliamentary audit, the Ministry of Strategy and Finance said the country's economy is facing flaccid recovery momentum with the local financial market staying unpredictable.

South Korea's exports fell 5.9 percent from a year earlier in September, backtracking from a 2.6 percent gain in the previous month, while the current account surplus hit the lowest in four months in August.

The finance ministry said it will take an expansionary fiscal policy, including the implementation of a supplementary budget worth 11 trillion won, to stimulate the economy and create more jobs in the remainder of the year.

"To promote the country's growth potential, the government will carry out sweeping structural reform and seek a new growth engine," it said. "The government will also make efforts to control uncertainties such as household debts."

Earlier in the week, the finance ministry said strong fiscal intervention will help the South Korean economy attain its 2016 growth target of 2.8 percent in the end despite some downside pressures ahead.

"Despite many lingering downside risks in the fourth quarter, we can accomplish the goal or closely approach the target line, at least, along with strong fiscal efforts," Vice Finance Minister Choi Sang-mok told reporters on Tuesday.

At the same time, the International Monetary Fund (IMF) kept the country's economic growth forecast steady at 2.7 percent for this year and 3 percent for next year. 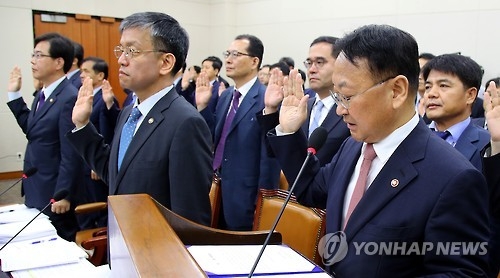