SEOUL, Oct. 5 (Yonhap) -- The Olympic women's golf champion Park In-bee said Wednesday she will sit out the rest of the LPGA season while recovering from her thumb injury.

Park, who won a gold medal at the Rio de Janeiro Olympics, said her left thumb has gotten better, adding that she will be able to go out to the field and practice starting next week. However, the 28-year-old, who has 17 LPGA Tour wins under her belt including seven majors, said she still needs treatment for a while longer.

"Although my injury got better, I want to reduce the number of tournaments playing this year," Park said at a press conference for a local golf tournament. "I want to play next season without an injury, so I want to focus on treatment this year."

Earlier Wednesday, Park decided to skip the LPGA KEB Hana Bank Championship next week, the only LPGA stop in South Korea. There are only seven LPGA tournaments left this season, including the Lorena Ochoa Invitational, which she won last year.

Park, however, said she will consider playing at two events at home -- the KB Financial Star Championship on Oct. 20 and Champions Trophy on Nov. 25. KB Financial is Park's main sponsor and the golfer is the host of this year's Champions Trophy, a match play event pitting South Koreans from the LPGA Tour against those from the domestic tour.

"My sponsors also told me to compete in the event if my thumb is well," she said. "I will ultimately decide whether I should play at those two events after checking my thumb."

Park said the cast on her thumb was removed two weeks ago and she doesn't feel pain when she doesn't move it.

"I thought it would be a long process to reach this state, but the recovery has been quicker than I thought," she said. "I feel good and even my doctor feels happy."

This year's Champions Trophy will bear Park's name and has been named the "Champions Trophy Park In-bee Invitational." It will be staged at Dongnae Benest Golf Club in Busan from Nov. 25 to 27. The tournament, which has a total purse of 1 billion won (US$897,820), is sponsored by ING Life.

"It's a great honor to host a tournament like this where the top South Koreans compete," she said. "Through the Olympics I think golf became a popular sport for the public, and I want to help further spread that popularity."

A total of 24 South Korean golfers on the U.S. LPGA Tour and players from the KLPGA Tour will go head-to-head on separate teams. Ten golfers from each tour will be selected based on their money rankings, and each team will make two additional picks.

The tournament in its second year will have a format similar to the Presidents Cup or Solheim Cup, featuring fourball and foursome matches as well as singles.

Park was the captain of the victorious LPGA team at last year's event. 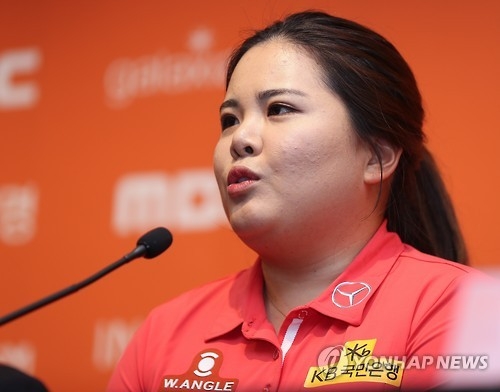