(Editor's note: This article is the first in our feature series on South Korea's traditional marketplaces.)
By Byun Duk-kun

SOKCHO, South Korea, Oct. 7 (Yonhap) -- Just like other traditional markets in South Korea, Sokcho Tourist Fish Market offers a chance to travel back in time and experience what it was like before the country became one of the most advanced and wired nations in the world.

Such a unique experience, along with a wide range of both traditional and new products and eateries, are apparently worth a trip to this eastern port city of Sokcho to many. 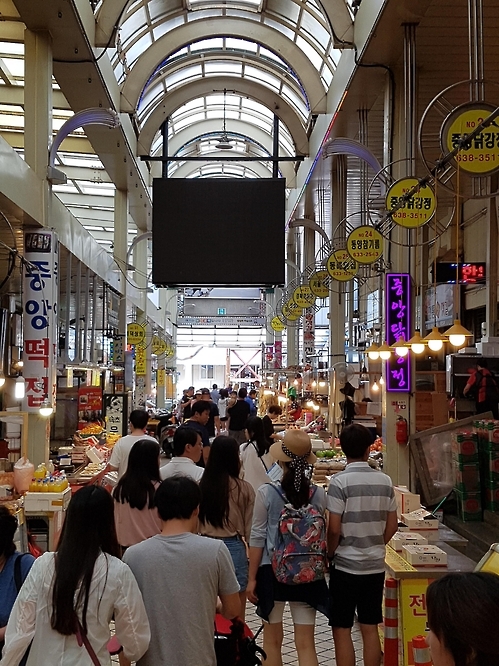 "Our mothers used to say that nothing but suffering awaits those who embark on a journey, and many merchants and shopkeepers here still hold that belief and treat their customers as their own children away from home," said Park Seong-won, owner of a seafood restaurant and head of a merchants' association for seafood restaurants at the market that boats 60 years of history.

"When they see a young customer, they just assume a young person must not have enough money to spare and charge them 40,000 won (US$35) when they should be charging 50,000 won. When they see a foreigner, their affection grows as they see a person on a journey such a long way from home," he added.

But even after a voluntary discount from the merchant, the actual price of a good or service is left to bargaining, without which, Park and many customers here noted, shopping at an old, traditional market will not be as fun as it should be.

"The association began providing special classes for our merchants to develop service-minded attitudes in 2006 with a goal of preserving the culture of bargaining while improving their customer service," he said. 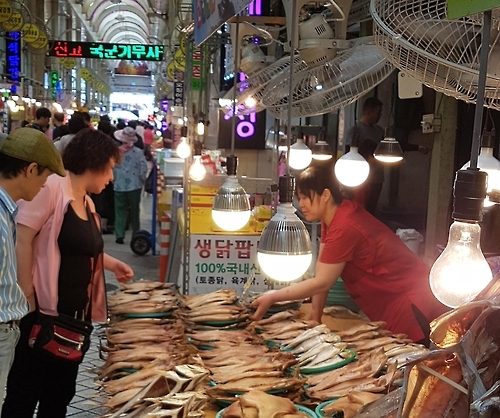 Kim Young-ah from Seoul said the fun of bargaining was the very reason she visited traditional markets instead of what she called new and "frankly more convenient" shopping malls or large, chained grocery stores.

"In fact, we saw a large mall just a few blocks from here, and both of my daughters begged me go there instead to buy their souvenirs for the trip, but I thought it would be a better experience for them to walk the alleys of a traditional market and also have an experience of bargaining for themselves," the 37-year-old said.

"Bargaining culture is very fun and interesting, though I haven't tried it myself because I am too shy," said the 21-year-old from France.

"We are especially interested in traditional markets in that they offer a lot of different kinds of food," added Charlie Gouin, a 20-year-old also from France.

Unlike many other traditional markets here that often specialize in and are famous for rare, indigenous crops or herbs, the Sokcho market offers a variety of things to eat from local specialties, such as susu bukkumi, a cake made of millet flour with a ranging kind of stuffings, to nationwide famous sweet and sour chicken and hodduk, a pancake usually stuffed with melted sugar.

Han Doo-sam, head of a larger association that represents all 850 shops and some 1,000 merchants at the market, notes despite their nationwide fame, all the dishes are also available at any other market.

"Many other markets have sweet and sour chicken, but what makes our products different and better is that we continue to improve them and develop new dishes," he said.

For instance, the famous hodduk in Sokcho has plant and flower seeds as its stuffing instead of the usual sugar. And now, many vendors here offer hodduk stuffed with cheese, a never-before seen type of hodduk that has been specifically developed to meet the new tastes of young people and foreigners.

Such efforts to innovate have apparently paid off by attracting many new customers who may not have visited the market otherwise, and long lines of people waiting to taste the market's latest and trendiest dish on any day of the week prove such a success.

"I do not mind waiting in line a little since this is what I came here for in the first place," said Kim Ah-ram, 23, from Seoul. "I know it sounds crazy to drive three hours from Seoul just to have hodduk, but if you happen to be in the area anyways, a short trip to the market is definitely worth it." 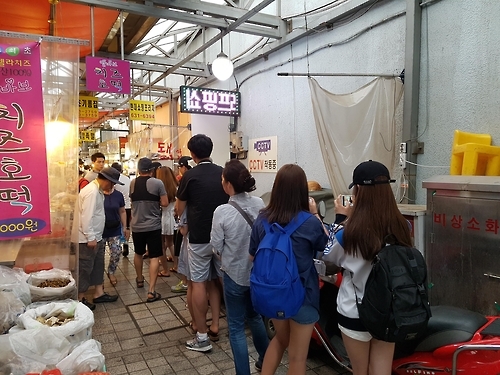 With a growing population of foreigners in Gangwon Province, as well as a growing number of foreign tourists finding their way to the Sokcho market, the market is again changing its ways of dealing with customers, along with its already long list of things to eat.

"We had over 3.5 million visitors last year and about 10 percent of them were foreigners, and the number keeps growing every year," said Han, adding he also expected to see the number of Chinese tourists grow exponentially in the next few years on the recent launch of direct flights between China and nearby Yangyang airport.

"We have visitors from all around the world as we offer dishes that can satisfy both Westerners and Asian tourists. The fish market recently began to offer king crabs as foreign tourists seem to like it, and even in case of sweet and sour chicken, they are working to find a new type of sauce that will meet the taste and preference of foreign tourists," he said.

The merchants' association and the city government are also working together to help prepare the market for a growing number of foreign visitors during and after the 2018 Pyeongchang Winter Olympic Games.

They are currently offering foreign language classes to merchants, and are planning to place interpreters for foreign tourists throughout the market, according to Han.

The officials from the merchants' associations noted their efforts to better accommodate foreign tourists may have come rather belatedly.

However, the reason for their efforts showed a clear difference from the many others who have already taken such measures as a way of boosting their sales.

"Selling our goods to foreigners is not a problem because we somehow manage. What bothers many like me is that we do not know what they really need because we are not able to communicate with them," said Park.

"When I see a foreign tourist, who must be not used to sitting down on floors, sit and eat at one of our restaurants, I feel sorry and grateful at the same time," he added. 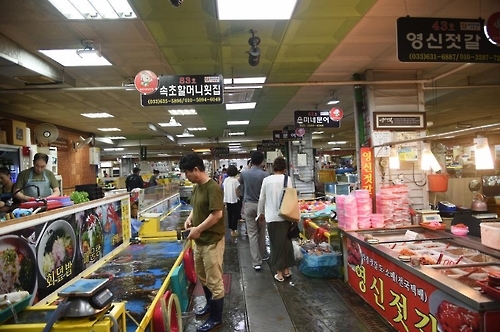 HOW TO GET THERE: From Seoul, buses are about the only available means of public transportation to Sokcho, located 210 kilometers east of Seoul. Gangnam Express Bus Terminal offers 32 daily trips to and from the eastern port city. The fare is set at 17,000 won ($15.30) for an one-way trip that roughly takes 2 hours and 30 minutes. From Sokcho Express Bus Terminal, the market is only about 5 minutes by taxi away with an expected fare of less than 5,000 won.