South Korea will host Qatar at Suwon World Cup Stadium in Suwon, some 46 kilometers south of Seoul, at 8 p.m. Thursday. This is their third match in the final Asian qualification round for the 2018 FIFA World Cup. They will head to Iran next.

"We are facing a very important match," Stielike said. "We feel pressure because of the (scoreless) draw with Syria, but we must not lose points at home. We must overcome this pressure in order to reach the World Cup."

South Korea, trying to make their ninth World Cup consecutive appearance, collected a 3-2 victory against China at home -- nearly blowing a 3-0 lead -- and settled for a scoreless draw with Syria on the road in their first two matches. The Taeguk Warriors are now third in Group A.

Against Syria, South Korea were harassed by the opponents' time-wasting tactics in the end. Stielike said his side will try to prevent such a situation from happening again on Thursday by scoring first.

"If the opponents play defense-oriented football, it's important to score early in the match," he said. "Against Syria, we had some chances, but we failed to take advantage of it, and later in the match, we were in a rush."

Stielike, who had previously coached Qatari clubs from 2008 to 2014, said it won't be easy to score against the Arab nation. Although Qatar have suffered two losses in their first two qualifiers, the coach said they still played relatively well.

"They lost, but they didn't play bad," he said. "We are a little bit under pressure, but a big team must show in difficult moments that they are strong."

Stielike said his side will try to keep the balance between offense and defense when they are controlling the match. However, it's not easy to predict how Qatar will play since they made a coaching change just two weeks ago. 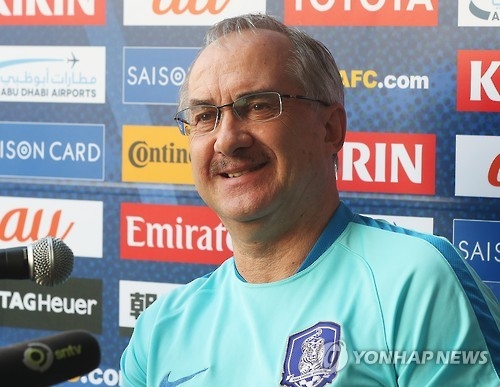 Qatar recently appointed Jorge Fossati as their new head coach. The 63-year-old Uruguayan is familiar with the national team, having managed them during the 2010 FIFA World Cup qualifiers. He also had coached Al Rayyan to the Qatari league championship last season.

"We don't know whether Qatar will show the same style of play as they displayed before," he said. "It's going to be a tough match tomorrow."

Stielike said his defenders need to be aware of Qatari attackers like Sebastian Soria and Rodrigo Tabata. The German coach called on his own forwards to wreak havoc on Qatar's defense without just relying on red-hot Tottenham Hotspur man Son Heung-min.

Captain Ki Sung-yueng said that the team atmosphere is great and the players have learned from the past two matches what they should improve.

"We know we'll be criticized when we fail to deliver a good performance," Ki said. "Everyone is ready to play a good match."

The Swansea City midfielder added that he has big expectations for attackers including Son, who has netted five goals in six matches with his English Premier League club.

"In football, you need a goal to get a victory," he said. "Our attackers have an important role."