Kaine made the remark during the first and only vice presidential TV debate with his Republican rival, Indiana Gov. Mike Pence, in response to a question about if he would take preemptive action if intelligence shows the North is about to launch a nuclear missile that can reach the U.S.

The debate, especially the question, underscored the serious concerns sparked in the U.S. by the North's fifth nuclear test that Pyongyang is making real headway in its nuclear and missile programs, and could soon perfect capabilities to threaten the U.S. mainland with nuclear-tipped intercontinental ballistic missiles.

Pence said that the U.S. should rebuild its military, including modernizing its nuclear forces, in the face of growing nuclear threats from the North. He also called for greater pressure on North Korean leader Kim Jong-un to give up his nuclear ambitions.

"If Donald Trump is president of the United States, we're not going to have the kind of posturing in the world that has Russia invading Crimea in Ukraine, that has the Chinese building the islands in the South China Sea, that has literally the world, including North Korea, flouting American power," Pence said.

"We're going to go back to the days of peace through strength," he said.

Kaine said that the U.S. should work closely with China to rein in the North, pointing out that Beijing endorsed the latest U.N. Security Council sanctions in the wake of the North's fourth nuclear test in January.

"They're starting to get worried about North Korea too. So they actually supported the sanctions package even though many of the sanctions are against Chinese firms, Chinese financial institutions. So we're working together with China and we need to," Kaine said. 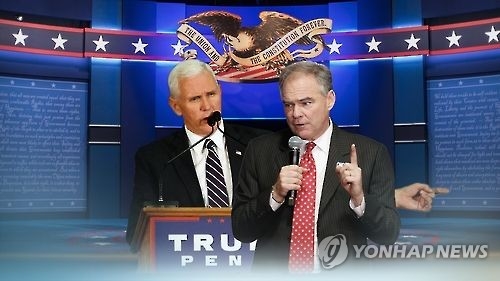