The Mavic Pro, which folds down as small as a phablet and weighs 744 grams, is equipped with a small gymball camera and can fly at a speed of up to 65 kilometers per hour for as long as 27 minutes, the Shenzen-based firm said.

"The amazing thing about the Mavic Pro is that while it is small and portable, it still packs all the high-end features DJI drones are known for," Moon Tae-hyun, head of the Seoul headquarters, told reporters in Seoul. "You can slip it into a backpack and bring anywhere on a trip or vacation."

The drone has sensors on the front and bottom, providing users with obstacle avoidance and autonomous landing, the firm said.

"A user can fly the model with a smartphone and update the photos using the DJI Go application to share with others on social networking services (SNS)," said Moon.

The latest models offer a transmission range of up to seven kilometers, just like DJI's flagship model the Phantom 4, he said. DJI claims 80 percent of the global drone market.

The Mavic Pro equipped with five cameras will be sold for 1,230,000 won (US$1,100) in South Korea with its official launch eyed for November, company officials said.

Earlier this year, the Chinese firm opened its first overseas store in the Hongdae area in western Seoul, and the world's first indoor drone arena in South Korea in a move to target one of the world's fastest growing industries.

The South Korean market for the commercial technology of unmanned aerial vehicles is currently estimated at around 27.8 billion won and expected to expand to 1 trillion won by 2019, according to government data. 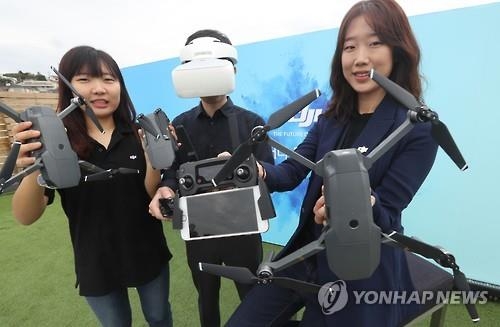