SEOUL, Oct. 5 (Yonhap) -- The Baltimore Orioles' Korean outfielder Kim Hyun-soo went hitless in his postseason debut, as his club bowed out in extra innings in the American League wild card game against the Toronto Blue Jays.

Kim was 0-for-4 against the Jays at Rogers Centre in Toronto Tuesday (local time), hitting into four groundouts in the 5-2 loss in 11 innings.

He rolled on to second in his first at-bat. Then in the fourth inning, with Adam Jones at first, Kim hit a sharp grounder right at first baseman Edwin Encarnacion. Jones had a quick start toward second and Encarnacion only had one play at the first base bag.

Kim swung on the first pitch in the top sixth, and grounded out to second. In the eighth, Kim hit another grounder, this time a high chopper to Encarnacion.

Kim was lifted for a pinch hitter in the top of the 11th, right-handed batting Nolan Reimold, with left-hander Francisco Liriano on the mound.

In the bottom of the seventh, Kim caught a fly ball at the warning track just as a beverage can was thrown in from the stands.

The Jays beat the Orioles 5-2 on a three-run home run by Encarnacion in the bottom of the 11th. Brian Duensing started that inning for the Orioles and struck out Ezequiel Carrera. 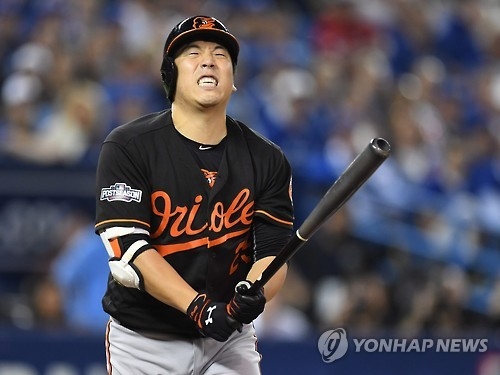 The O's then went to right-hander Ubaldo Jimenez with the top of the Jays' lineup due. He promptly gave up a single to Devon Travis, and Josh Donaldson followed it up with a single.

Then Encarnacion, who led the Jays with 42 home runs and 127 RBIs this season, jumped on the first pitch fastball and sent it to the upper deck in left field, for the Jays' fourth walk-off win in their postseason history.

Four of the Jays' runs came on long balls. Jose Bautista gave the home team a 1-0 lead with a solo home run in the bottom second,

Mark Trumbo then answered for the O's with a two-run home run in the fourth.

The Blue Jays tied things up at 2-2 on a one-out single by Carrera in the bottom fifth, which chased starter Chris Tillman from the game.

The teams then engaged in a battle of the bullpens, and the much-maligned Blue Jays' bullpen got the last laugh. Their five relief pitchers combined for five no-hit innings, with one walk and six strikeouts.