SEOUL, Oct. 5 (Yonhap) -- Unionized workers at Hyundai Motor Group threatened Wednesday to stage a general strike if the government invokes its right to emergency arbitration to order workers at South Korea's No. 1 carmaker to return to work, sources said.

The move came after Labor Minister Lee Ki-kweon said last week the government would consider calling for an emergency measure if the trade union and management fail to iron out a compromise and end a strike at Hyundai Motor Co. that is seriously hurting car parts subcontractors and the overall economy.

"We cannot condone the government dismissing our legitimate strike as being illegal," a unionist told Yonhap News Agency on condition of anonymity. "(We) will neutralize the emergency arbitration move through a general strike by our 100,000 unionists."

"The current labor-management relations are careening towards the worst point since the foreign exchange crisis (in the late 1990s)," said Rep. Lee Yong-deuk of the main opposition Minjoo Party of Korea who is a member of the National Assembly's committee on environment and labor. 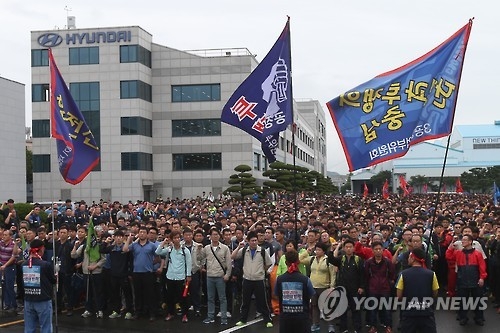