SEOUL, Oct. 5 (Yonhap) -- Some 1,000 residents from the southern city of Gimcheon staged a massive rally in downtown Seoul on Wednesday to protest the decision by South Korea and the United States to deploy a U.S. anti-missile system to Seongju County, adjacent to the city.

The protesters called on the central government to scrap the plan to station a Terminal High-Altitude Area Defense (THAAD) battery at a golf course in Seongju by the end of 2017 to counter North Korea's evolving nuclear and missile threats. The system is a core element of the U.S.' global missile defense program

Residents from the city, some 234 kilometers south of Seoul, have been concerned that THAAD's powerful AN/TPY-2 radar system could pose health risks and hurt agricultural crops. They also fear their region could become a military target with THAAD located there.

Some members of Won Buddhism also participated in the rally, raising the possibility that the new deployment could adversely affect peaceful pilgrimage sites not far from the designated site.

"We will definitely deliver to the president a message about the agonies of Gimcheon residents," said Na Young-min, a co-chair of the group leading the anti-THAAD rally.

Na later sent a letter to President Park Geun-hye, calling for a cancellation of the deployment plan.

The commander-in-chief has repeatedly defended the deployment as a "minimal, self-defense measure" to cope with Pyongyang's escalating security threats. 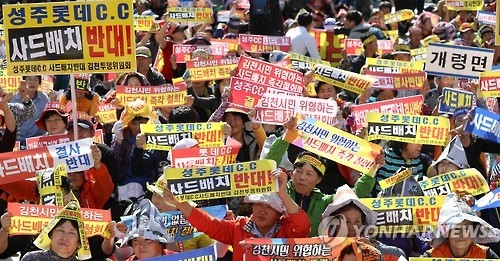