The opening ceremony was held at the Busan Cinema Center with about 5,000 people, including actors, filmmakers and cinema fans, attending.

This year's festival will run though next Saturday, featuring 299 films from 69 countries from around the world, a scale almost as large as last year's 304 films from 75 countries. 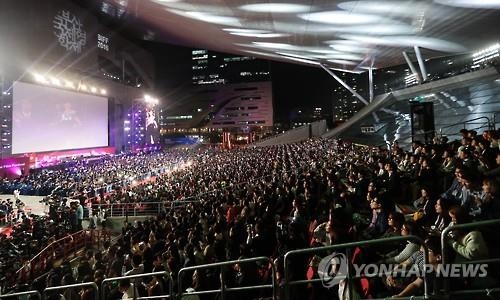 Leading the 299 titles was Korean-Chinese director Zhang Lu's "A Quiet Dream," which depicts the story of a young Korean woman who runs a bar and takes care of her paralyzed father and the three men trying to woo her.

It became the first Korean opening film of the Busan festival since "Always," a romance by Song Il-gon in 2011.

Iraqi director Hussein Hassan's "The Dark Wind" about innocent love, traditional values and the collision of conflicting religious beliefs will close the festival.

In the Gala Presentation section for screening the latest works from contemporary master directors, four movies -- "Bleed for This" by Ben Younger, "Daguerrotype" by Kiyoshi Kurosawa, "Rage" by Lee Sang-il, and "Your Name" by Makoto Shinkai -- wait to meet movie fans.

Eleven films from 10 countries, including Indian director Padmakumar Narasimhamurthy's "A Billion Colour Story" and "In Between Seasons" by South Korea's Lee Dong-eun, are up for competition in the "New Currents" section for up-and-coming Asian directors. 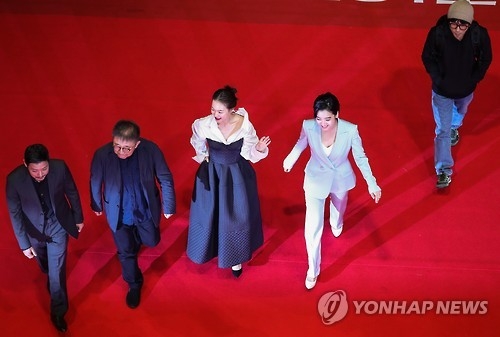 The lineup appears to be as rich as in usual years, but when one looks deeper into it, he or she can easily find the scars left by the last two years of disputes between festival executives and the sponsoring city Busan.

Since 2014, BIFF and the Busan metropolitan government had been locked in a conflict over what some have called "municipal interference" when then-festival executive director Lee Yong-kwan pushed for the screening of a controversial documentary in spite of opposition from Busan mayor and BIFF organizing committee Chairman Suh Byung-soo. The city of Busan funds around half of the festival's annual budget.

The dispute forced Lee to leave the position and Kang Soo-youn, an iconic actress who became the festival's co-executive director in 2015, become the sole director.

BIFF claimed that the city's unprecedented audit into the festival organizers and drastic cut in funding were "political retaliation." Local film groups declared a boycott of this year's event, accusing the city government of interfering with their artistic freedom.

Busan countered that the audit aimed to root out irregularities and even stated that Lee and his followers were themselves politically biased and were using the festival to promote their own agendas and views.

Four of the nine groups later lifted the boycott after Suh stepped down from the festival chairmanship, and the two sides amended the festival rules to make it "free" from any political influence.

In May, Kim Dong-ho, the festival's founding director, was named to fill the vacancy left by the Busan mayor.

Because five groups are sticking to the boycott, some of South Korea's latest film sensations will be absent from the "Korean Cinema Today-Panorama" category for screening commercially or critically acclaimed Korean films.

"Train to Busan" and "Tunnel" were not on the list because the former film's chief producer Lee Dong-ha and the latter's director Kim Seong-hun are members of the Producers' Guild of Korea (PGK) and the Directors' Guild of Korea (DGK), groups that are not participating in this year's festival.

"We decided not to submit our films to the festival without any apology from the Busan mayor and measures to restore the former festival director Lee Yong-kwan's disgraced honor," an official of Redpeter Co., the studio behind "Train to Busan," told Yonhap News Agency on the condition of anonymity.

The two disaster films attracted about 11.5 million and 6.5 million viewers, respectively, in South Korea this year. 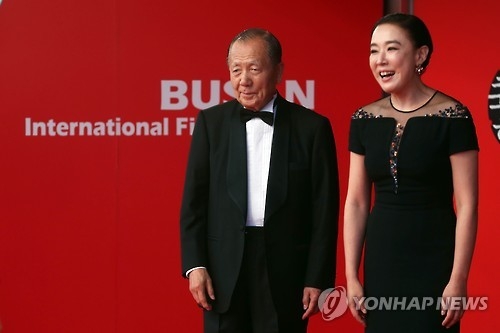 South Korean actor Kim Eui-sung held a poster reading "Independent film festival for Busan" as he walked on the red carpet during the opening ceremony. The "Train to Busan" actor visited Busan as a jury member of the 2016 BIFF award for actors along with actress Cho Min-soo.

"Although some groups withdrew their boycott, we don't support everything about the Busan film festival," a task force member said requesting not to be named. "There are opinions that more measures are needed to ensure the festival's independence, and the issue of restoring Lee's honor remains unsolved."

The PGK and DGK also decided not to hold their annual events this year due to the lingering dispute.

The DGK has so far honored winners in the "Korean cinema Today-Vision" category for Korean indie filmmakers but will skip the award for this year. The PGK will not throw "PGK night," a networking party for the Korean film industry people.

The nation's four major film distributors -- CJ Entertainment, Showbox, the Next Entertainment World and Lotte Entertainment -- will skip their annual events to announce upcoming film projects to reporters. That's partly because of the anti-graft law that took effect last week as well as to distance themselves from the lingering standoff surrounding the film festival.

The so-called Kim Young-ran law, named after the former head of the Anti-Corruption Civil Rights Commission, bans public servants, educators and journalists from receiving free meals valued over 30,000 won (US$27), gifts worth more than 50,000 won or congratulatory or condolence money of more than 100,000 won.

"We already decided not to hold our annual Showbox Night before the Kim Young-ran law came into force," a Showbox official said. "We cannot stand by either side because the BIFF dispute has yet to be resolved."

Those parties have been an essential part of the film festival because many famed actors and filmmakers attended them.

Film scholars and those who rate films for the state-run Korea Media Rating Board were not invited to this year's festival because their hotel and flight fees are no longer covered by the festival budget with the law's enforcement.

BIFF organizers say the law is adding more troubles to the festival that already received a dent from the two-year-long dispute with the sponsoring city.

"Without a party or reception, it cannot be a film festival," a Busan city official said. "I'm afraid the BIFF's festivity will be affected by the Kim Young-ran law."

The festival also had to move all open-air events scheduled for BIFF Village set up on the Haeundae beach to Dureraum Square at the Busan Cinema Center as Typhoon Chaba tore down the walls of the makeshift facilities.

Many world-renowned movie directors and actors will attend the festival, but the lineup size was largely scaled back from past festivals.

They include Miles Teller and Aaron Eckhart, stars of Ben Younger's biographical boxing film "Bleed for This."

Teller is best known to American and Korean film fans as Andrew Neiman in "Whiplash," an art house film that has drawn about 1.6 million moviegoers in South Korea. In the country, more than 1 million in attendance is considered a huge success for indie films. Eckhark is best known for playing Harvey Dent in "The Dark Knight," a 2009 superhero film directed by Christopher Nolan.

Among the acclaimed Asian movie directors coming to Busan are Taiwan's Hou Hsiao-hsien and Japan's Hirokazu Koreeda, two habitues of BIFF. Their films were not invited to the festival, but they will attend a panel discussion session on the Asian film industries with South Korean director Lee Chang-dong.