Standing out among the options being discussed is South Korea sharing the control of nuclear weapons with the United States.

Security experts on Wednesday called for an extension of the nuclear sharing policy the U.S. has with four North Atlantic Treaty Organization (NATO) members, citing it as an effective tool to deter North Korea's nuclear threats.

Instead of arming itself with nuclear weapons, South Korea should not only "share" U.S. nuclear weapons through rotational deployment but also jointly decide on the use of such weapons in case of a conflict breaking out on the Korean Peninsula, they said.

There are growing calls in Seoul to develop its own nuclear weapons for self-defense after Pyongyang conducted its fifth nuclear test last month. The most powerful detonation to date escalated worries that the communist regime is nearing to achieve its stated goal of developing a nuclear-tipped intercontinental missile that can reach the U.S. mainland.

"I oppose a nuclear South Korea. Going nuclear means taking the same path taken by the North, breaking the Nuclear Non-Proliferation Treaty (NPT) and undermining the alliance with the U.S., which has vowed to protect its allies through extended deterrence," said Park Won-gon, who teaches inter-Korean relations at Handong Global University.

"Among others, government officials should step up efforts to persuade the U.S. to send nuclear-armed arsenals such as B-2 and B-52 bombers and nuclear-powered submarines to South Korea on a rotational deployment basis. South Korea should also share the control of nuclear weapons with the U.S.," he argued. 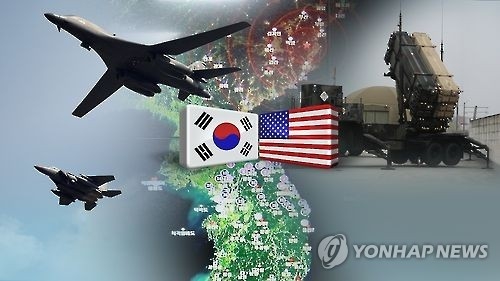 Currently, the U.S. has deployed bomber-launched nuclear weapons to bases in the four NATO member states -- Germany, Italy, Belgium and the Netherlands, allowing them to jointly manage the weapons.

In the Korea-U.S. Integrated Defense Dialogue held in Washington in May, however, U.S. officials balked at the idea of adding South Korea to the list. They said nuclear sharing could result in a nuclear arms race in East Asia.

"Nuclear sharing between South Korea and the U.S. could irritate China and Russia as they do not want U.S. nuclear weapons on the Korean peninsula. But the existence of nuclear arms in South Korea will be the most powerful deterrent against the North's evolving nuclear threats," Cheong Seong-chang, a senior researcher at the Sejong Institute, said.

Citing a U.S. think tank report released early this year following the North's fourth nuclear test in January, he said the U.S. could offer its nuclear shield to Seoul and Tokyo at the same time by deploying nuclear weapons to Guam.

Cheong is one of the security experts that have teamed up with local lawmakers who are strongly urging the government to take the nuclear option for self-defense.

On Sept. 12, three days after the North's fifth nuclear test, a group of ruling and opposition party members requested further discussions of all possible options for self-defense, including nuclear weapons.

In what appears to be a gesture to placate such calls here, the U.S. temporarily sent the B-1B strategic bombers to Osan Air Base in Pyeongtaek, 70 kilometers south of Seoul, once on Sept. 13 and again on Sept. 21 in show of power against the North's relentless provocations.

The U.S. has said it will protect South Korea and other allies through its extended deterrence which regards any nuclear attack on an ally as an attack against the U.S. itself.

Pyongyang has conducted five nuclear tests in the past decade, and the sixth is widely expected later this week or early next week to commemorate its first detonation of a nuclear device on Oct. 9, 2006.

Meanwhile, there have been calls to build up the country's conventional military force and in particular, develop weapons that can effectively counter North Korea's missile threats ranging from mobile launch military platforms to submarine-launched ballistic missiles (SLBMs).

Seoul has already said it will create its own so-called kill chain to detect and destroy North Korea's extensive arsenal of weapons of mass destruction, which can reduce damage sustained in a shooting war, while others have called for moving up the country's war fighting potential to the next level.

Moon Keun-sik, an analyst at the Korea Defense and Security Forum, said last month that the country should build a nuclear-powered submarine, as it is the only solution to counter the threats posed by North Korea's SLBMs. Such subs will be roughly on par with counterparts operated by Britain and France.

"With conventional diesel-electric submarines, it's impossible to track and strike nuclear-powered submarines that could carry SLBMs. We are running out of time to build our own nuclear submarines, as the North is moving to deploy its SLBM-armed submarine in a couple of years," he told Yonhap News Agency.

Calls for a nuclear submarine have gained urgency here in recent months as the North has demonstrated technological progress in SLBM development.