SEOUL, Oct. 5 (Yonhap) -- The National Institute of Korean Language on Wednesday launched an online Korean dictionary open to entries from members of the public.

The "Urimalsaem" dictionary, which means "spring of our language," is designed to allow the public to add words to the Korean vocabulary and revise them in a way similar to Wikipedia.

Heo Seong-mun, a college student who won a contest on creatively defining Korean words, made the first entry with the Korean term for "talent sharing."

The term will appear in the open dictionary after being screened by experts who seek to ensure no expletives or advertisements are added to the vocabulary.

"I entered 'talent sharing' in the hopes that everyone will share their knowledge of Korean on Urimalsaem," Heo said during a launching ceremony for the state institute's site at opendict.korean.go.kr.

"Talent sharing," according to Heo, is defined as offering one's talents and abilities to help others at no cost.

The open dictionary is currently made up of more than 1 million existing words, including colloquial expressions, dialects and jargon. 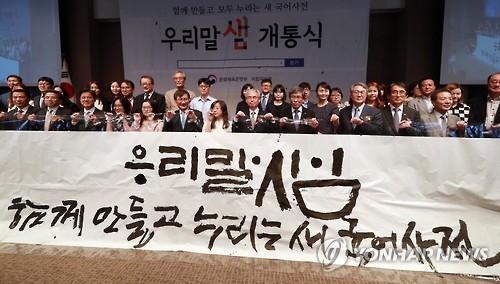