SEOUL, Oct. 5 (Yonhap) -- A Korean language speech contest for U.S. soldiers was held on Wednesday after a two-year hiatus with eight contestants showing off their skills, organizers for the event said.

The U.S. soldiers who showed off their prowess belonged to the Eighth Army stationed in Yongsan, central Seoul, the South Korean Army said in a statement. It said those that made the short list were neither Korean-American soldiers nor U.S. soldiers known to be fluent in Korean.

The annual competition, which began 18 years ago, didn't take place in 2014 due to the Sewol ferry sinking in April that took more than 300 lives and in 2015 due to North Korea's land-mine provocations in August that maimed two South Korean soldiers. 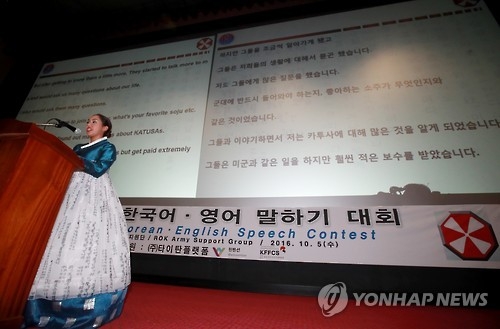 The finalists delivered a three-minute speech on their first impression of the country, feelings about South Korean military forces and the importance of the alliance between Seoul and Washington.

"I was planning to leave the country after finishing my duty period here. But I came to love this country due to its attractive culture and people," Corporal Issac A. Sulsona said in the statement through his wife, who is Korean.

The winner was Cpl. Sean Santos, who gave a speech on the group of troops called the Korean Augmentation Troops to the U.S. Army (KATUSA), a unique military system that the U.S. Army does not operate with its other allies.

Santos expressed thanks to the role of KATUSAs who helped him get accustomed to life in South Korea. He was awarded a plaque and prize money worth 1 million won (US$900).

The KATUSA program came into existence in July 1950, when Gen. Douglas MacArthur, who led the United Nations Command during the early part of the Korean War, asked for the dispatch of Korean soldiers to the U.S. Army to help enhance their fighting capability. South Korea's first President Rhee Syng-man accepted the request and the KATUSA program was born.