Lee earned 294 out of 893 votes to win the election for the Korean Olympic Committee (KOC) presidency beating Chang Ho-sung, a college professor, by 81 votes.

"I feel the heavy weight of responsibilities," Lee said. "I will try to build a KOC where everyone can come together. I will try to lead by example and let my actions do the talking. I will build a great future in sports for the younger generations."

Lee, however, was regarded as a controversial candidate, with the KSF reeling from a major corruption scandal that surfaced during his watch. Key executives have been convicted and received jail terms, as the KSF is now under the management of the KOC. 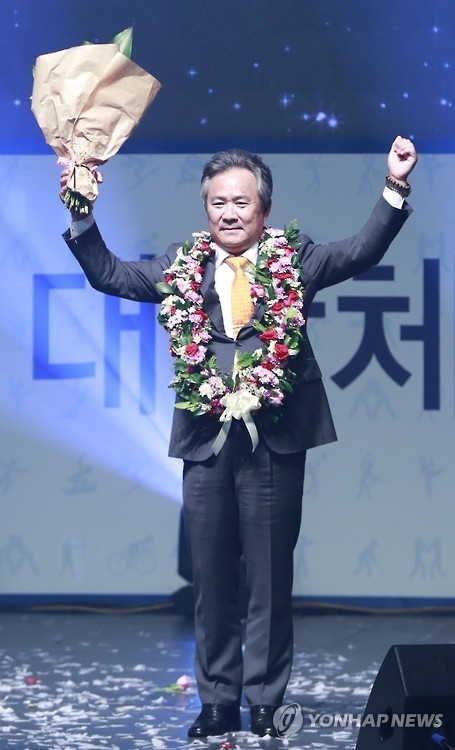 The winner will serve the KOC until February 2021, and the term will cover the next two Olympic Games: the 2018 Winter Olympics in PyeongChang, the first Winter Games in South Korea, and the 2020 Tokyo Summer Games.

Under domestic law, the KOC, which oversees the country's sports in general with a focus on elite sports, and the Korea Council of Sport for All (KOCOSA), which aims to promote daily sports and a healthy lifestyle for all, had to merge by March 27 for the purpose of having an advanced management system and environment in sports.

Since the merger in March, the KOC has been headed by Kang Young-joong and Kim Jung-haeng, but the two didn't go for re-election.