South Korea and Qatar will go head-to-head on Thursday at Suwon World Cup Stadium in Suwon, some 46 kilometers south of Seoul. Both sides will play their third match in the final Asian qualification round for the 2018 FIFA World Cup.

South Korea are currently third in Group A with one win and one draw. Qatar are sitting at the bottom of the group with two losses.

"South Korea are one of the strongest teams in the group," Fossati said. "We recognize that they have very good players and they have an excellent coach with high career and experience. But I repeat, it's going to be a tough game for both sides."

Fossati said he believes in Qatari players although they have failed to post a victory so far.

"I believe too much in Qatar players' quality," he said. "Also, I trust in their (hard) work."

Fossati replaced fellow Uruguyan Jose Daniel Carreno just 11 days ago. However, the 63-year-old is familiar with the national team, having managed them during the 2010 FIFA World Cup qualifiers. He also had coached Al Rayyan to the Qatari league championship last season.

Fossati has beaten South Korean clubs before. In 2011, he led Qatari club Al-Sadd past Jeonbuk Hyundai Motors at the Asian Football Confederation Champions League. On their way to the final, Fossati's side also beat the K League Classic side Suwon Samsung Bluewings in the semifinals.

However, Fossati said he doesn't care about the past, although he added he had a "nice feeling" coming to the Suwon World Cup Stadium.

"I think that history is important to know, but the most important thing is the present," he said. "We need to focus on the game (tomorrow)."

Defender Mohamed Musaab said the players are confident of playing a good game away from home.

"We didn't just come here to lose," he said. "We have to work hard for 90 minutes. We have to do everything that the coach wants us to do." 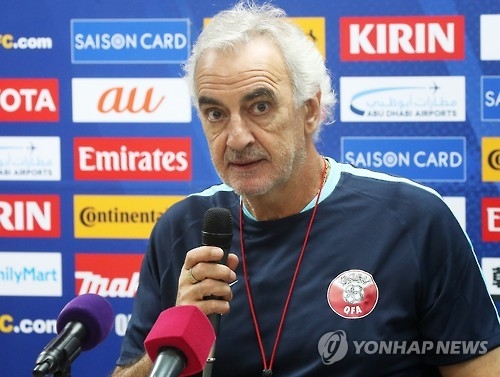