BUSAN, Oct. 5 (Yonhap) -- The country's Maritime Minister Kim Young-suk said Wednesday the government will form a tripartite team along with labor and management to maintain employment of workers at cash-strapped Hanjin Shipping Co. amid a cargo chaos.

The remark was made during a meeting with Lee Yo-han, the labor union chief of the ailing shipper, and Yeom Kyung-doo, chief of the Federation of Korean Seafarers' Unions, at the regional office of the Ministry of Oceans and Fisheries in the southeastern port city of Busan.

"Our sailors are very precious resources that hold global competitiveness," Minister Kim said. "I will pay attention to every one of them."

Early last month, Hanjin Shipping, the world's seventh-largest shipping line, was put under receivership as its creditors, led by the state-run Korea Development Bank, rejected its latest self-rescue package worth 500 billion won (US$451 million), which fell short of the 700 billion won demanded by its creditors.

Its court receivership sent ripples through the global shipping network and left more than half of its ships stranded at sea with their sailors on board.

Approximately 750 South Koreans who are on board 58 ships managed by Hanjin Shipping will be put on the waiting list for unassigned sailors, according to the shipper. 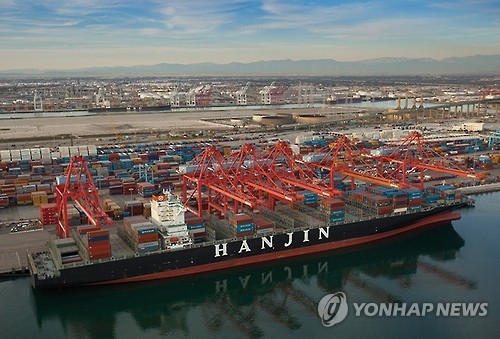