South Korean Foreign Minister Yun Byung-se and EU's foreign policy chief Federica Mogherini reached the agreement when they held a bilateral meeting in Brussels on the sidelines of the conference of donor countries for Afghanistan, the ministry said.

The two sides shared the view that the North's fifth nuclear test highlighted the urgency of the North Korean nuclear issue and pledged close cooperation in efforts to adopt stronger U.N. Security Council sanctions and implement them thoroughly, the ministry said.

During the meeting, Yun expressed appreciation for EU's efforts to carry out Security Council resolutions and strengthen unilateral sanctions. He also asked for continued efforts to increase pressure on Pyongyang through independent sanctions and diplomatic pressure, the ministry said.

On bilateral cooperation, the two sides agreed to hold a summit of their leaders next year and other high-level meetings in order to expand and deepen cooperation not only in the North Korean nuclear issue, but also in other global matters.

Mogherini called for early ratification of the Framework Agreement for the Participation of Korea in EU Crisis Management Operations, and Yun promised to do his best to complete the ratification process as early as possible, the ministry said. 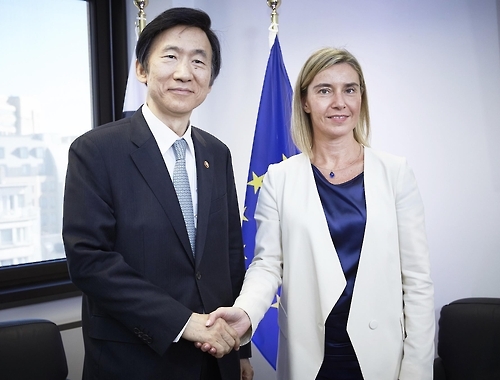