SEOUL, Oct. 6 (Yonhap) -- National Assembly Speaker Chung Sye-kyun on Thursday participated in the gathering of five middle-power nations held in Australia, bolstering ties among the parliaments of the member countries.

The cross-regional gathering dubbed "MIKTA," named from the initials of Mexico, Indonesia, South Korea, Turkey and Australia, was first launched in 2013 to find ways for the middle-power countries to play a bigger role in regional and global issues.

The participants, including Chung, discussed ways to bring innovation to their parliaments for more accessible governments. The countries then shared ideas in various areas including global security, gender equality and sustainable development, as well as economic issues.

During his visit to Australia, Chung also placed flowers at a monument in Sydney on Wednesday honoring those who fought for South Korea during the 1950-53 Korean War. 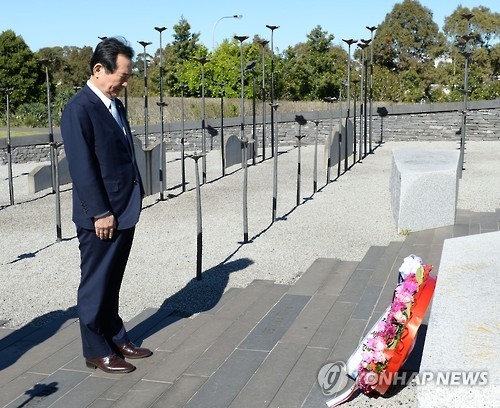