SEJONG, Oct. 6 (Yonhap) -- The South Korean government said Thursday that it will pour an additional 10 trillion won (US$8.98 billion) into propping up Asia's fourth-largest economy which has failed to show clear signs of recovery.

In an economy-related ministers meeting in Seoul, the government released a new set of stimulus plans for the final quarter of the year to minimize the fallout from downside risks at home and abroad, such as the ongoing corporate restructuring, walkouts at carmakers and a possible U.S. rate hike.

The central and provincial governments and state-run corporations will participate in the efforts to spend a combined 10 trillion won in invigorating domestic demand and corporate investment, in addition to 16.6 trillion won that has not yet been implemented from the scheduled 2016 spending and a supplementary budget.

"The South Korean economy has been experiencing fluctuating economic data on consumption, facility investment and exports. Its recovery pace is not solid," the finance ministry said in a release.

"It's still in a course of economic growth that the government has earlier anticipated, but we face intensifying downside pressure."

South Korea's exports fell 5.9 percent from a year earlier in September, backtracking from a 2.6-percent gain the previous month, while the current account surplus hit the lowest in four months in August.

Retail sales rose 6 percent on-year in August as the scorching heat during the summer boosted purchases of expensive home appliances, such as air conditioners, while industrial output rose 2.3 percent in August from a year ago on a gain in mobile chips, largely offset by a drop in auto output.

But such upturn was largely offset by a production disruption in the auto industry as partial walkouts at major carmakers, including industry leader Hyundai Motor Co., with the massive recall of the Galaxy Note 7 weighing heavily on industrial output and outbound shipments.

In a parliamentary audit on Wednesday, the finance minister stressed a strong fiscal role in boosting the economy, saying that the government will do its best to reach its earlier growth target of 2.8 percent. 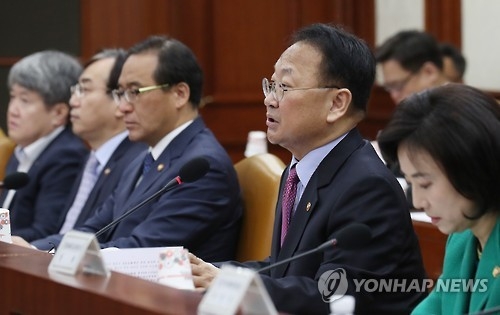