SEOUL, Oct. 6 (Yonhap) -- South Korea's ruling Saenuri Party said Thursday the opposition bloc's push to appoint an independent counsel to investigate the death of a protester who was hit by a police water cannon last year could lead to another parliamentary deadlock.

The remark came after South Korea's three opposition parties on Wednesday submitted a proposal to approve the formation of an independent prosecution to check into the death of Baek Nam-gi. The activist had been in a coma ever since a water cannon knocked him down during a massive anti-government demonstration in November last year.

While the ruling party and police say there is no clear link between the water cannon and Baek's death, the opposition bloc have criticized the excessive crackdown by the authorities.

The investigation proposed by the opposition parties is set to focus on whether the water cannon used against the protester violated any laws, and find those responsible for the alleged excessive force.

Amid the controversy, the ruling party said the proposal must be first discussed by the parliament's Legislation and Judiciary Committee.

"The opposition parties are only seeking to boast their power, even as the country is facing tough challenges such as North Korean nukes, problems facing the economy, and typhoon damage," Rep. Chung Jin-suk, the floor leader of Saenuri said considering the proposal.

"No discussion on the independent counsel can be made during the regular session of the parliament before the agreement is made by both the ruling and opposition bloc at the committee," Chung pointed out, adding the party also believes an independent counsel is unnecessary.

Political pundits said the remark came as the judiciary committee is headed by a Saenuri lawmaker, who will also not be inclined to cooperate with the plan.

The party whip added if National Assembly Speaker Chung Sye-kyun seeks to pass the proposal at the parliament directly without a nod from the committee, the situation may lead to another deadlock.

The dispute came after the parliament passed a motion to sack a Cabinet minister for alleged ethical lapses. The ruling party argued that in collusion with the opposition bloc, Chung railroaded the motion through parliament. 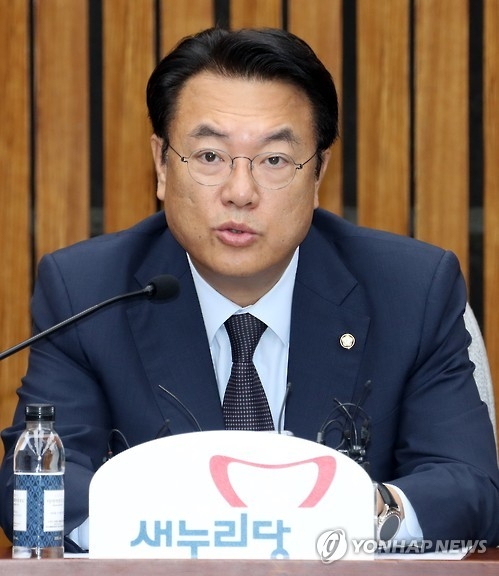 Ruling party warns of another deadlock on independent counsel

Ruling party warns of another deadlock on independent counsel