SEOUL, Oct. 6 (Yonhap) -- Chinese companies are actively seeking to be listed on the South Korean stock market this year thanks to cheaper costs and a relatively short period of time to complete listings, industry sources said Thursday.

If the three companies are given the nod for listing, it will mark the first time for six Chinese companies to become listed on the local bourse in a year.

Analysts said Chinese companies are opting to be listed on the Seoul bourse due to cheaper costs and an easier listing process than other stock markets. 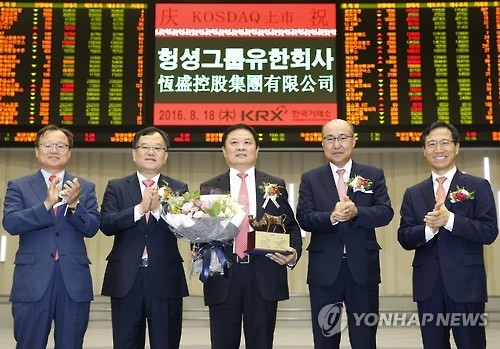 "It takes a relatively short period of time to get listed here and the cost for listing is also lower than in the United States," an official of the bourse operator Korea Exchange said. "Chinese companies should wait several years to be listed on the Chinese or Hong Kong stock markets because of many applicants."

No Chinese companies have been listed on the South Korean bourse until early this year in the wake of the delisting of a Chinese textile company from the KOSDAQ market in 2011 for dubious accounting practices, just months after being listed.

Watchers said the market's focus is on whether Chinese firms' recent push to get listed in the South Korea will be able to eliminate the so-called China risk, which refers to vague investor distrust in Chinese businesses.

In light of that, China's listed companies are ramping up efforts to get rid of investor distrust by strengthening shareholder-friendly policies, an industry source said.

Heng Sheng Holding Group has also vowed to pay 15 percent of net profit in cash dividends this year, while announcing a plan to set up an office in South Korea to better communicate with shareholders.
(END)