"Elliott is a shareholder of Samsung Electronics and we will carefully consider the proposal by the shareholder," an official at Samsung said.

Elliott's two units -- Blake Capital and Potter Capital -- made the proposal in a letter sent to Samsung's board.

Blake and Potter hold a 0.62 percent stake in Samsung Electronics. 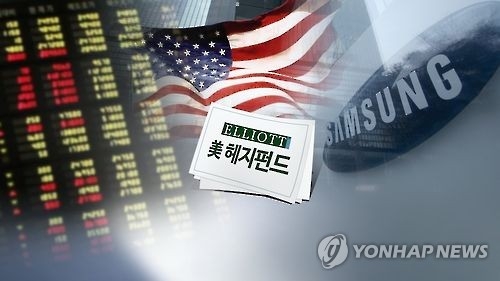 Blake and Potter said Samsung's shares have been typically trading at "steep valuation discounts," compared with stocks of the company's competitors.

Samsung's recent stock buyback program worth 11.4 trillion won was welcomed by the market, but Elliott said it believes that "those efforts have clearly not been sufficient to remedy Samsung Electronics' excessive and inefficient capital structure."

In the letter, a spokesperson for Blake and Potter said, "We see this as a defining moment and a tremendous opportunity for the forthcoming new leadership of Samsung Electronics to further advance the company's remarkable legacy."

"Now is the time for real shareholder value, corporate governance and transparency improvements, which we believe will help Samsung Electronics achieve an equity market valuation that properly reflects its first-class portfolio of businesses," the spokesperson said.

The proposal by Elliott came as Samsung is moving to limit the damage done by the global recall of the Galaxy Note 7 over a battery problem at a time when Lee Jae-yong, vice chairman of Samsung and heir apparent of Samsung Group, has taken key leadership roles.

Last month, Samsung nominated Lee to the board of the company, signaling that he has been brought to the forefront of Samsung's management and decision-making.

Elliott's proposal is almost in line with long-running speculations about the future of Samsung's governance.

To help increase Lee's shareholding in Samsung Electronics, many market watchers have speculated that the electronics giant could transform into a holding company system.

Yoon Tae-ho, an analyst at Korea Investment & Securities, said the proposal by Elliott gives "justification" for Samsung to transition into a holding company structure.
(END)